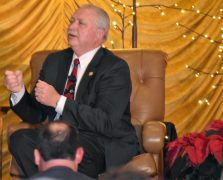 Indiana farm bureau members heard from Lt. Governor Suzanne Crouch, Senator Todd Young, and their own president at the annual convention in French Lick. In a fireside chat format Randy Kron discussed a range of issues like protecting animal livestock in the state and federal tax reform.

“That’s front and center right,” he said. “Our public policy team, Bob White, takes care of the national issues. He just spent Monday, Tuesday, Wednesday out there talking to our Indiana delegation about tax reform, what was important. Any kind of bill like that there’s going to be winners and losers and I want to make sure Indiana agriculture is under the W list and not in the loser list. So, we’re looking at tax reform, working on it, and there’s a lot of things behind the scenes happening.”

Kron added INFB members might be getting a call to action once the bill moves through the conference committee if it becomes apparent that members’ voices are needed to lobby their representatives.” 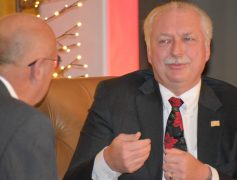 He said Indiana Farm Bureau continues work preparing for a new farm bill in Washington, also where more is going on than meets the eye.

“I had a conversation earlier this week with Senator Donnelly who actually sits on the Senate Ag Committee about the farm bill. I learned that there’s a lot more going on behind the scenes than we really think about. They’re trying to get their ducks all in a row to get it ready so they can present a farm bill and get it moving. They’re trying to get the tough issues worked out.”

Kron outlined membership successes this year and said INFB will continue the emphasis on membership in 2018. They will be doing a review of all programs to ensure the organization remains relevant just one year before turning 100.

Fertilizer Prices Increasing by the Day