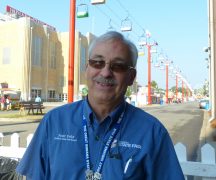 The weatherman hasn’t cooperated with Indiana farmers this year, but he decided to make it a great stretch for the Indiana State Fair. Weather has been both dry and moderate in temperatures, and that has brought out great crowds and smiling faces, according to state fair board member and farmer Scott Fritz from Pulaski County.

“Weather wise it has been a perfect fair, and good weather makes people happy,” he said during Indiana Farm Bureau’s Farmers Day old fashioned pancake breakfast. “They’re not hot, they’re not grouchy and they’re having a great time. It’s like every day is a Saturday, and the livestock folks are saying things have just gone really smooth, unloading, loading, shows, so it’s just been a wonderful fair.”

And he told HAT the great weather has made for some record attendance days.

Fritz commended the other board members and staff at the state fair for their hard work, and he said 4-H projects and activities at the fair appear stronger than ever.

“It’s been said to me that the Indiana State Fair showcases 4-H more than any other state fair, and I think I heard Renee McKee of Purdue Extension say there’s over 10,000 static exhibits just in the 4-H building. And the amount of people coming in and out of there to look at those projects is just amazing to see. It’s just a great tribute to the kids, the quality of the exhibits is really high, and people enjoy viewing those projects, not to mention all the animals. That’s true with the animals too.”

Hear more from Fritz in the HAT interview:Scott-Fritz-Indiana-State-Fair-board-member 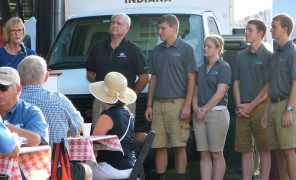 Farmers Day was another beautiful day as several hundred started it with the pancake breakfast. During the event Lt. Governor Suzanne Crouch addressed the many farmers on hand, calling the agriculture industry the backbone of Indiana. Indiana Farm Bureau president Randy Kron presented a $5,000 donation to the state officers for Indiana FFA, the organization cultivating “Indiana agriculture’s next generation of leaders.”