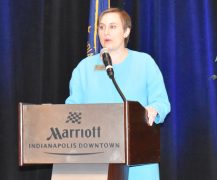 The newly expanded Agribusiness Council of Indiana is hosting its annual conference and expo in downtown Indianapolis. The two day event concludes Friday. On day one, Chris Williams, Rosen’s Inc. spoke about change in agriculture and offered ideas on How to Make the Most of Change. Then ACI committee chairs were introduced and outlined their plans for 2018.

The president of ACI, Amy Cornell, said one of the major changes in the organization itself is the recent merging of the Indiana Seed Trade Association into ACI. “So, we wanted to take some time to go through the plan for 2018, explain the new committee structure to our members to let them know how they can get engaged and get involved.”

One way to get involved this year is through the series of regional meetings.

“In June we will have four regional meetings that focus on an economic outlook, infrastructure update, lunch with a local area thought leader, and then spending the afternoon looking at workforce development and workforce retention issues,” Cornell told HAT. “In July we’re offering regional grain training sessions that will include both fumigation and grain grading sessions. We’re also going to be partnering with farm organizations to have networking with a purpose sessions where we’re going to be doing group volunteering at area food banks, and we’re partnering with Feeding Indiana’s Hungry in order to bring those projects about.”

For the last ten months the ACI nutrient management committee has been working on standards for a 4R program. The committee has decided self-certification is the best path forward.

“They have settled on a self-certification, voluntary 4R program that will be checked with random audits,” she explained. “So, we are in the process of forming an advisory committee that will be coming together to develop the specific standards for the program.”

Cornell is hopeful there will be a rollout of the program in early 2019.

She tells HAT the Agribusiness Council of Indiana is the premiere organization and proactive voice for Indiana agribusiness, representing seed, grain and feed, plant food and ag chemical sectors of Indiana agriculture.

Friday sessions at the conference include a look at lessons learned about dicamba in 2017, and keynote speaker Damian Mason, entrepreneur, farm owner, writer and speaker.