U.S. ethanol exports totaled a record 218.7 million gallons (mg) in February—up 148% from January—and nearly 50 mg more than the previous record set in December 2011, according to government data released this morning and analyzed by the Renewable Fuels Association (RFA). It is widely believed by trade sources, however, that February’s export data includes some volume that was actually exported in late January (particularly to China).

U.S. exporters sent a record 103.2 mg of ethanol to Brazil—besting the previous monthly high to Brazil set more than six years ago. February marked the fourth straight month that Brazil was the top U.S. export customer, taking nearly half of all ethanol exports. According to the data, China increased its purchases of U.S. ethanol to a 22-month high of 33.1 mg. Canada and Singapore captured the third and fourth spots at 22.0 mg and 14.8 mg, respectively. These four markets netted 80% of all U.S. ethanol shipments, with the remaining volumes scooped up by 30 countries. Year-to-date exports stood at 307.0 mg through February, marking the strongest start in history.

China was the third-largest market for U.S. ethanol exports in 2016, accounting for nearly a fifth of total exports; however, shipments nearly disappeared last year as the country imposed its first U.S. ethanol import tariff. While U.S. ethanol shipments to China have resumed in recent months given its overwhelming cost competitiveness, China’s imposition this week of an additional 15% tariff on top of the existing 30% duty will likely put a stop to further shipments in the near term.

Overseas sales of denatured and undenatured ethanol for non-fuel, non-beverage purposes retreated 73% in February, returning to more typical volumes of 1.1 mg and 1.6 mg, respectively. Most denatured product for non-fuel use headed to Canada (0.8 mg) and South Korea (0.2 mg), while Nigeria stepped away from the market following 4.1 mg of U.S. shipments in January. Colombia (0.7 mg), Sweden (0.3 mg), South Korea (0.3 mg), and Mexico (0.2 mg) purchased the bulk of American undenatured ethanol for non-fuel purposes.

On trend with 2017, the first two months of 2018 were absent of any fuel ethanol imports. 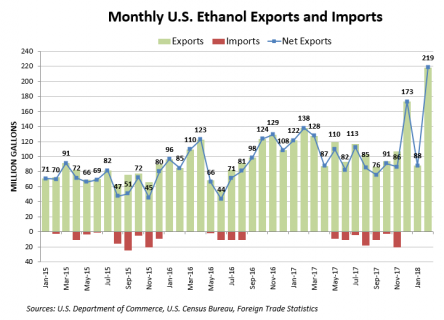