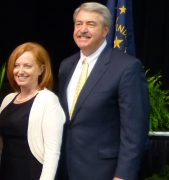 “He said that he knew that Ted McKinney was going to wake up every morning seeking to sell more American agriculture products in foreign markets,” she said. “We couldn’t be in agreement more, but we know that when he’s doing that he is also opening up the door for our products here in Indiana to be able to have new markets in other countries and outside of Indiana.”

We’ve known about this eventuality for many months, and the Lt. Governor says ISDA, with McKinney’s leadership, has been preparing for the change. Announcing the transition was just a matter of time.

“We have a plan in place to not only pick a new director, and it will be big shoes to fill, but in the interim Melissa Rekeweg, who is currently the Deputy Director of ISDA, will serve as the interim director for the agency, so we will have that seamless transition.”

Crouch told HAT they have also had a couple of months to begin discussions about that vacant director position, and have spoken with numerous people. 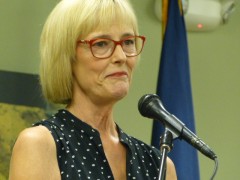 “We are looking for the same leadership style that presented, and that is someone who can be comfortable and connect with our FFA and 4-H and with our Farm Bureau, but also can walk into a corporate board room and connect with those CEO’s and presidents of our agribusinesses here in Indiana,” she said. “So we have been in those conversations and look forward to a decision in the very near future.”

“Ted McKinney brings decades of experience and expertise to his new role at the U.S. Department of Agriculture,” Lt. Governor Crouch added. “We are proud and excited for this opportunity for Ted. He has been a tireless advocate for Hoosier agriculture in his exemplary service to our state, and I know he’ll be an effective voice promoting American agriculture around the world.”

Donnelly said, “Congratulations to my friend and fellow Hoosier Ted McKinney on being confirmed by the Senate as the U.S. Department of Agriculture’s Under Secretary for Trade and Foreign Agriculture Affairs. McKinney’s strong background in agriculture in Indiana has prepared him to serve America’s ag community by helping to expand trade of agricultural products in foreign markets.”

Recognition of McKinney’s experience and qualifications for the job was the theme across the state and across the U.S. from President Trump’s announcement of his nomination right up to the final confirmation vote. One proponent is the President of Indiana Farm Bureau.

“This is an important role, and Ted McKinney is well-suited to handle the responsibilities. His confirmation is great news for the agricultural community,” said INFB President Randy Kron. “Ted has served Indiana agricultural interests well during his tenure at ISDA, and I expect that he will continue to be an excellent advocate for agriculture in Washington, D.C. We’re very proud of Ted, and we are excited to see him promote and expand American agriculture’s influence around the world.”