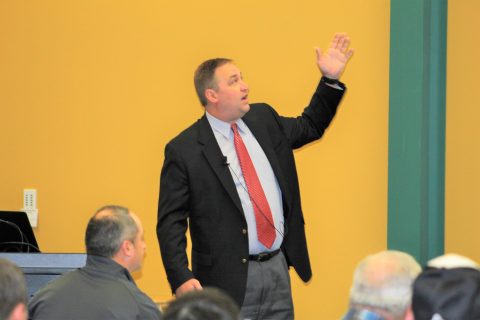 2018 was a tough year for many farmers. I wish I had better news for 2019, but former vice president of the Federal Reserve Bank of Kansas City and current Purdue Extension Director Dr. Jason Henderson says rising interest rates will make 2019 just as tough, if not tougher.

“I think right now you’re looking at an interest rate environment here in the federal reserve that while they’re wanting to take their foot off the gas pedal a little bit, they’re still looking at slightly higher interest rates by the end of 2019. So, you’re still going to see that upward pressure on debt service costs for agriculture and some weight and downward pressure on farmland values coming from financial markets.”

A strong U.S. dollar will also be problematic for ag markets in 2019. “I think in 2019 down the dollar right now remains fairly elevated. You’re getting our interest rates here in the U. S. higher than the interest rates across the globe, so a lot of investors are coming into the United States and they need a dollar to make that investment,” Henderson stated. “So, I think the dollar through 2019 is going to remain historically high and strong and that’s going to limit agriculture’s competitiveness in global markets.”

Henderson says that he is still strong and bullish on agriculture in the long run, despite the tough times farmers have faced in recent years.

“We need to see some stronger growth in 2019 and 2020 in the rest the world, especially those developing countries, and some stronger growth hopefully in Europe. That will bring more balance into financial markets globally. You’ll see your other country’s economies strengthen. That means that their currencies are going to strengthen, which will kind of start to stabilize and bring our dollar back into more historical balance, which will increase the competitiveness of agriculture. But I think those are long term trends.”

Henderson went on to say that everything runs in cycles. Right now, we’re at a point in the cycle with high interest rates and high exchange rates, but he believes that will work out, too, as global economies grow stronger.

Henderson spoke at the Purdue Top Farmer Conference on Friday.