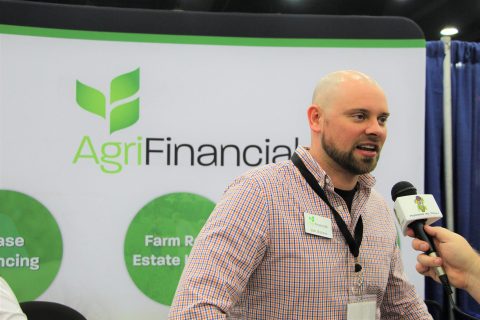 The National Farm Machinery Show in Louisville continues today. Many folks attend the show to look at all the equipment, but they end up doing more than that. Plenty of resources for farmers are available at the show, including from financial institutions.

“Interest rates. It’s always the first question we get,” says Josh Dickson, national sales manager for AgriFinancial, on what’s being talked about at their booth during NFMS.

“You know we saw a great amount of low interest rates for a period of 6 months, and then all of a sudden they’re starting to increase a little bit. Still, obviously, rates that people want to borrow money against, but, at the end of the day, they’re not as good as they were a year ago. That’s the top of the mind question we get.”

Interest rates are rising as a result of action from the Federal Reserve to help combat inflation. What the Fed will do next is the big unknown.

“That’s going to be the multimillion-dollar question…The big thing is that what happens with the bond market and what the Fed’s doing with the rates. Obviously, it impacts everything. It’s not a one-for-one. If it goes up a quarter does that mean our rates go up a quarter? Not necessarily, but it is something to where they’re hedging their bets a little bit more because no one knows what the future holds and it’s a little bit more volatile than it has been in the past. So, we’re seeing higher interest rates because of those issues at hand.”

As Dickson mentioned, the interest rates available now are still good rates, and AgriFinancial can help you find the type of loan you’re looking for.

“A lot of people can do term financing on real estate, as can we. It depends on what you feel comfortable doing in the market. If you want a short-term fixed or a long-term fixed rate, we have anywhere from a 30-day fixed term to a 30-year fixed term. So, lots of options that we have. But our key product is going to be our ag equity line of credit. What it enables you to do is it is a liquid product where you can secure with real estate. If you don’t have a purchase in mind at the moment, it will allow you at least a 5-year period to where you could have it in a liquid form where you can pull it out, pay it back as much as you’d like, and if any kind of opportunity would come in for input prices, you want to lock them in quicker, or you want to make a real estate purchase, then that would give you the ability to do so.”

Stop by booth 7655 in the South Wing at the National Farm Machinery Show or visit AgriFinancial online at cgb-agfi.com.