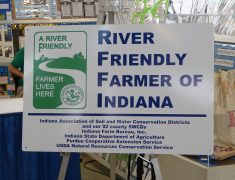 In August at the Indiana State Fair 49 Indiana farmers representing 44 counties and consistent efforts to protect Indiana’s natural resources like soil and water, were honored with the River-Friendly Farmer award. Since 1999 by the Indiana Association of Soil and Water Conservation Districts (IASWCD) has presented the award to over 900 farmers. Current president for the organization, Jamie Scott from Warsaw said conservation is a regular commitment for the honorees. They don’t do it for awards.

“I hope this award means a lot to them,” he told HAT. “I know there’s a few of them that say we just do that, and that’s the group we’re dealing with. A lot of times farmers are that way, definitely good stewards of the land are, but it’s pretty important. I’ve been telling people for the last year or so I don’t know many young couples that are wanting to move to Flint, Michigan, Des Moines, Iowa, places that we’ve had some water quality issues. So, them taking care of the natural resources and the water here in Indiana is important to everyone, not just for me trying to farm but for those businesses and people who are going to live here.” 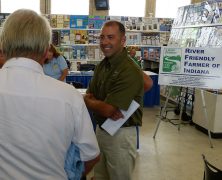 As you travel rural Indiana you’ll often see the River-Friendly Farmer sign near the road. Now almost 50 more of those signs are going up.

“We were lucky enough 10-15 years ago to be a River-Friendly Farmer ourselves and display that sign with honor, and yes, it’s a great accomplishment to have that at your driveway, on your shop wall, somewhere being recognized as being that good steward of Indiana conservation.”

The awards were presented by Indiana Lieutenant Governor Suzanne Crouch and Indiana Farm Bureau President, Randy Kron. River Friendly Farmers are nominated by their local Soil and Water Conservation District based upon their management practices, which help keep rivers, lakes and streams clean in Indiana and beyond. This annual award is sponsored by the IASWCD, Indiana State Department of Agriculture Division of Soil Conservation and the 92 local Soil and Water Conservation Districts, Indiana Farm Bureau, along with, Purdue Cooperative Extension Service, and the USDA Natural Resources Conservation Service.

A full list of this year’s winners including short bios and individual photos can be viewed on the Indiana Association of Soil and Water Conservation Districts website.

Learn more about Scott in the full HAT interview:Jamie-Scott-IASWCD-President