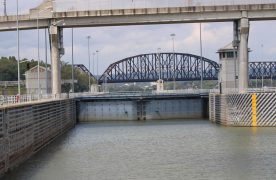 The Indiana Soybean Alliance (ISA) and Indiana Corn Growers Association (ICGA) hosted a River Tour to put the spotlight on the importance of the inland waterway system. Even though she is 4 hours from the Ohio River, Dekalb County farmer Sarah Delbecq is well aware of the river’s importance to agriculture, but what may not be as clear is the condition of the infrastructure itself.

“I would say you don’t have the appreciation for that until you see it, until you are in it and get go through it, so seeing those kinds of things are very valuable from this experience,” Delbecq said.

For Delbecq, going through a lock for the first time really put into perspective what it takes to keep the system operating. 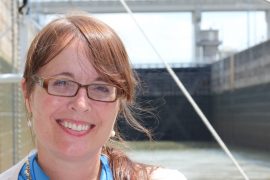 “Because if there is s failure at any point in any of this regardless of where you farm and what you farm you will feel it, getting to see all of that first hand, it kind of makes you an even better spokesperson and advocate when it goes to talking to policy makers,” said Delbecq. “I think farmers seeing it first hand is a good way to start the conversation.”

In his comments to river tour participants, Mike Steenhoek, Executive Director of the Soy Transportation Coalition said while funding for the inland waterway system is a priority, it is even more important that the federal government provide great predictability of funding. 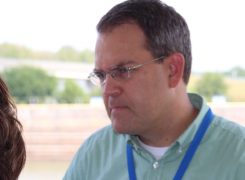 “And in the United States because our federal appropriations process is so unpredictable it really wreaks havoc when it comes to building an maintaining these critical assets,” said Steenhoek. “It’s not unexpected that you would have cost escalations and project delays and it is largely due to the fact we don’t fund these more predictably, so I think that’s a message that Congress really needs to understand, yes it’s about you guys providing more funding, but it’s also about you guys providing greater predictability of funding.”

Indiana has 350 miles of inland waterways with five locks and dams on the Ohio River along Indiana’s southern border.