A central Indiana dairy farmer is embracing the latest technology on his farm and reaping the benefits. John Carter has 80 cows in his herd on his dairy farm in Frankfort and has two Lely robots to do his milking. He said they made the move to robots because of their prior facilities.

“They were getting older and I was getting ready to graduate from Purdue. I just decided that if I was going to come back and maintain the dairy that, me personally, I wanted to do the robotics because of labor savings. Not necessarily labor savings, but just saving on personal time.” 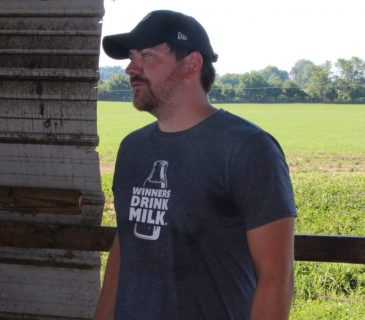 He says the folks at Lely call it a 3-day, 3-week, 3-month process. By that, they mean that the first three days are spent pushing cows through in an effort to get them used to the robot.

“So, the next 3 weeks you’re in the barn all the time just making sure cows are coming through and they’ll just slowly start to come in on their own. Then, by the end of 3 months you should see your whole herd, or a very good percentage of your herd, coming in on their own.”

“The cows just enjoy it and I enjoy seeing the them having the choice of when they want to eat, or milk, or sleep, or whatever. Just the free range of the cows was a big selling point for us.”

Carter says moving to the robots has allowed more time to focus on the other parts of their operation. They farm a lot of ground and have a hog operation in addition to the dairy.