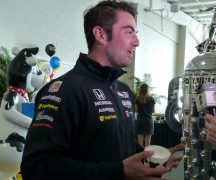 The 43rd Fastest Rookie event at the Indianapolis Motor Speedway went on as scheduled Tuesday, even in the absence of fastest rookie qualifier and two-time Formula 1 racing champion Fernando Alonso. He had obligations in New York City during national media day for the drivers. Three-time Indy 500 winner Johnny Rutherford accepted Alonso’s award, and predicted he would win the race Sunday.

The three other rookies in Sunday’s 101st running of the Indianapolis 500 did attend the luncheon, sponsored by Indiana’s dairy farmers, American Dairy Association Indiana and featuring milk and milkshakes.

“Milkshake is awesome!” was the response from driver Jack Harvey. “Actually this is pretty special, the best milkshake I’ve ever had!”

Harvey is from England and will start outside in Row 9 at Indy in the #50 Honda powered car. He told HAT rather than another milkshake in victory circle, some traditions need to stay the same.

“I think the tradition of drinking milk shouldn’t be changed and honestly I just hope that one day I might be able to taste it.”

Mingling with the various farmers at the track, Zach Veach, driving AJ Foyt’s #40 entry Sunday from Row 11, was right at home after growing up in corn, soybean, and cow country in Ohio. 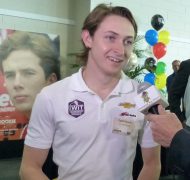 “It’s a small town of about 135 people,” Veach explained. “We had a stop sign and that was about it. How I got into this, my father was a big influence in motorsports because he was a national champion with truck and tractor pulling, so having the American Dairy Association come out here and a lot of people from the farming world, it feels a little closer to home. But we did that up until I was eleven and that’s when I got my chance to start pursuing my career in auto racing and ten years later we’re here at the Indianapolis 500.”

And the significance of the #40 on Veach’s car?

“The number 40 if because it’s the 40th anniversary of AJ Foyt’s 4th Indianapolis 500 win, so hopefully that’s a little extra luck for us when the green flag falls on Sunday.” 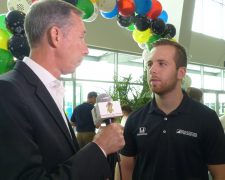 Race fans looking for a rookie who could repeat last year’s win by Fastest Rookie Alexander Rossi will certainly be watching Alonso from Spain. But don’t count out #19 Ed Jones either.

“It’s been a great start for us, first with qualifying 11th in the Indianapolis 500, it’s incredible. The Dale Coyne team behind me has given me a great car and the Honda performance has been amazing.”

Jones is from Dubai in the United Arab Emirates and had the second fastest lap speed in the field during Monday practice. Meet the rookies in the HAT YouTube video.