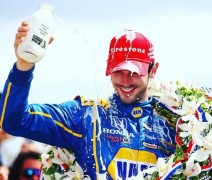 The historic 100th Indianapolis 500 is in the books and the winner Sunday was the fastest rookie HAT introduced you to last week. Alexander Rossi from California toasted with Indiana dairy farmers a week ago and then was handed the prized bottle of milk by milk lady Janet Dague after winning on fuel strategy, nearly running out of E85 but coasting in for the win.

In recent years, ethanol has played a role in America’s two premiere racing series, NASCAR and IndyCar. It’s E85 that powered the Chevrolet and Honda engines flying around the Indianapolis Motor Speedway Sunday, but it’s not quite clear to IMS historian Donald Davidson what fueled cars in the beginning. 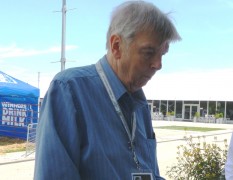 “In the beginning I think a lot of people used castor oil but I don’t know that that is true,” Davidson said. “But I know that the first use of alcohol and blends started I think probably 1927 and very quickly caught on. There was a set of specifications in the late 1920’s that the cars were 91 ½ cubic inch or 1 ½ liters supercharged, and they used exotic alcohol fuel.”

Gasoline has powered the Indy 500 cars in the past but it ignited easier and the safer alcohol fuels, methanol and now ethanol took over. Paul Dana was an Indy driver who pushed for ethanol adoption, which finally happened in the mid-2000’s, and he was the first driver of the entry sponsored by an ethanol promotion organization. But Davidson says there had been a push for ethanol previous to that.

“I remember one year Gordon Johncock, and this would probably be ’95 or so, he had retired pretty much, but he said he did have a group talking to him about running a car that would run on ethanol and that the car would be painted up like an ear of corn! That never went very far.”

Now E85 is the mandated fuel by IndyCar rules.

Hear more on fuels in the full HAT conversation with Donald:Donald Davidson at IMS-2016