Dry weather today, tomorrow and Wednesday. After a very chilly start yesterday where we saw frost over a large part of northern Indiana, we are going to see temps steadily work higher. In fact, we expect back to back above normal temperature days tomorrow and Wednesday! Upper 70s to low 80s can be seen over Indiana thanks to nice southwest flow ahead of our next front. Relative humidity values will be low, and evaporation rates will be near the maximum .25” of moisture per day. This will be a great field work set up. 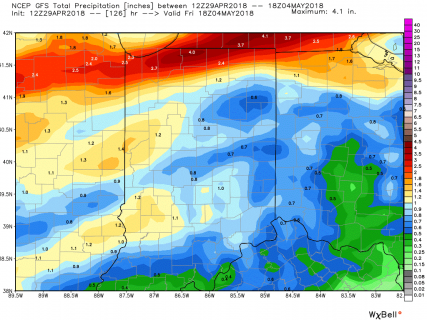 Our next rain event kicks off Thursday morning with an approaching cold front. We are lowing rain totals a little this morning in parts of the state, as it looks like some of the intensity we were concerned about last week is shifting. Right now, we are looking for scattered showers through the day Thursday, with a chance of stronger thunderstorms Thursday night, but mostly farther north, coming out of northern Illinois into northern Indiana. General shower action holds through the night farther south. Rains linger through midday and early afternoon Friday, but should be gone well ahead of sunset Friday. All told, we are breaking the rain totals and coverage down in the following manner. From US 24 northward, we are going to leave rains from .5”-2” with coverage at 100%. To get rain totals over an inch, you will have to see thunderstorms, and the best chance of those now looks to be over the northern third of the state, as previously mentioned. From US 24 southward, we expect rain totals of .25”-.75”, and most of the region will be half an inch or less. Coverage will be 90%. Still, the front for Thursday and Friday will be excellent for crops that have just gone in the ground. The map above is combined precipitation from the late week system from an American model. We think the precipitation is over done in terms of totals, but what is of note is the geographic spread…which is very similar to our projections for Thursday and Friday.

WE are dry for Friday night, Saturday, Sunday and next Monday. Temps will cool a bit behind the front, but should stay near normal. Then for next Tuesday, we have a minor disturbance crossing northern Indiana that can bring up to .25” over about 40% of the area. This disturbance does not look well organized at all. If it can organize further, we may have to bump the precipitation totals, but for now, it’s not a big thing. Southern Indiana sees nothing.

Dry for next Wednesday. A strong system arrives for Thursday the 10th and lingers through the 12th. That event can bring half to 1.5” rains to 90% of the region. As that circulation moves off to the east, we see the remainder of the 11-16 day period mostly dry, as high pressure parks right over the Great Lakes. Temperatures will be nearly normal to slightly below normal under that high.