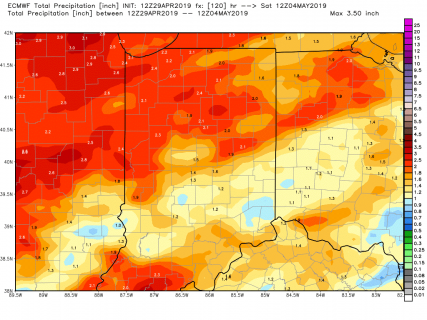 Another round of rain will be with us today, and we have no significant changes in our forecast going forward. There is still way too much moisture around, and yesterday’s rain action in northern Indiana was much heavier than we were hoping for in some spots. Rain totals in the Goshen area were pushing 2 inches! Today have showers moving in over central and northern Indiana, but they spread south tonight, and then additional rains come tomorrow and Thursday. Showers still look strong on Friday statewide, and we may even have to deal with some lingering shower action in southern Indiana on Saturday morning before clearing starts to win out. All told, we are expecting an additional .5”-3” for the remainder of the week with 90% coverage.  That runs today through Saturday morning. The map shows cumulative precipitation for that period.

Saturday should have clouds giving way to sun in the north through the day, but clouds dominate most of the day down south. The Sunday period starts with a mix of clouds and sun, but clouds quickly take over, as additional shower action returns. We have a wet finish to the weekend Sunday night into Monday, with a few hundredths to .3” coming with those showers.

High pressure sets up over Indiana for next Monday, allowing for a rare dry 24 hour period. However, that high will not linger long. Showers and thunderstorms start to move over the northern part of the corn belt and the great lakes for Tuesday. Rains in MI will drag across the northern third of Indiana Tuesday, and then Wednesday action sags farther south. By Thursday, the showers will be statewide. Once again, the combined totals favor the heaviest rains in the northern half to third of the state. Cumulative rain totals will be from .25”-1” with coverage at 80% of the state over the Tuesday-Thursday period.

Temps the next 10 days will be mostly normal. We will be a little warmer tomorrow into Thursday, but the rest of the period features nothing special in terms of temps. This pattern continues to show difficult conditions for getting any fieldwork done in many areas.