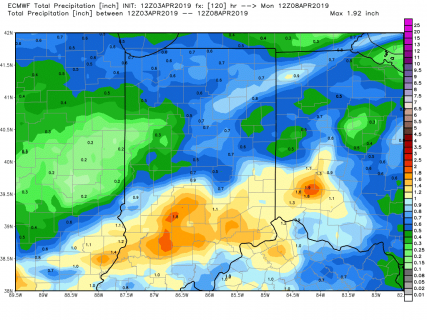 The state gets a little wet today with light rain overspreading the region. This morning and early afternoon, the northern part of the state will be most likely to be seeing rain. This afternoon and tonight, the central and southern thirds of the state will see better rain chances. Combined, we see rain totals for the entire event at a few hundredths to .4” with coverage at 80-90% of the state. Precipitation lingers into early tomorrow, particularly in east and southeastern Indiana, but generally, significant moisture is not expected for Friday. Clouds will be slow to break, but should allow for some late day sun.

We continue to forecast a great start to the weekend with sunshine dominating Saturday. Temps should moderate as well. But our next system remains on track to impact the second half of the weekend, with clouds increasing Saturday night. Rain arrives on Sunday and continues through Monday morning. Rain totals remain at .25”-.75” with coverage at near 90%. A few areas in southern Indiana may be ripe for a thunderstorm, but generally we are staying with our thought from yesterday, that thunderstorms are not going to be a widespread, big deal. If a thunderstorm does develop, it could push a few localized areas closer to an inch or inch and a half…but that will not be the norm. The map shows rain totals from today through next Monday morning, which is a combined total of 2 weather systems.

Tuesday and Wednesday will feature a mix of clouds and sun. We do not expect any well-organized shower action there. But we do see a better threat of rain coming later Wednesday night through Thursday and into early Friday. That system has really shown big signs of development over the past 24 hours and will shift in from NW to SE. Rain totals can be from .25”-1”, and we think there is good potential for some thunderstorm action. We turn out partly sunny on Friday and stay dry with sunshine through early the 14th.

The extended period gets active rather quickly. We continue to watch several waves of moisture coming through for the 15th through the 18th. We are leaving rain potential at 1-3 inches for now, with coverage at nearly 100% of the state. We go drier for the 19th and 20th. But model agreement is fleeting, so there is plenty of time for data showing less moisture for the extended period to emerge.