Precipitation broke out overnight over most of the state as a minor wave of low pressure pushed into the eastern Corn Belt. This low looks to track north into the great lakes, but we still will see some light snow hold on over the state through part of the day. Generally, this will be this morning in southern Indiana, and on through this afternoon up north. We can see a coating to an inch up north, and just some nuisance snows south bringing a fresh coating. The action does not look to linger through tomorrow now, which will be nice. WE should see good sunshine for tomorrow and Wednesday, even though colder air remains over the top of us.

Action on Thursday looks to be diminished as well. We have low pressure tracking through the great lakes and bringing moisture to WI, MI and Ontario. Some of this will sag south over the northern part of the state, but rain totals will be limited to a few hundredths to a tenth or two. This is significantly lower than our concerns last week, and it all has to do with the low tracking farther north. Temps will begin to moderate, though, as strong south and west winds come in with this circulation passing to the north.

Clouds mix with some sun on Friday, and while we can’t rule out a renegade shower, we do think that most of the region stays dry. Saturday still looks wet, with the potential of .25”- 1” rains over 60% of the state. That coverage is down somewhat from our last look, and it is due to several bigger holes opening up in coverage as the front sweeps through. Another 20% of the state will likely see some rain, but not quite up to that .25” lower threshold. We are dry Sunday, but clouds may hold over the state, as rains continue to pound Ohio. 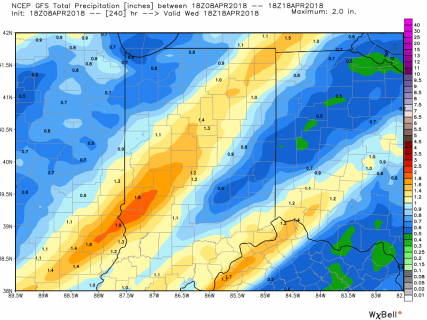 Dry Monday, Tuesday and Wednesday of next week to finish out the 10 day period. The map above shows total 10 day cumulative precipitation.

Good news…our extended window seems to be trying to trend drier. Cooler air holds through the end of next week, but we also do not pick, up significant precipitation. There is a very strong lower pressure complex in the grain plains for the 21st, and it looks like it will spread some .25”-1.25” rains into the eastern corn belt late the 22nd into the 23rd. Models suggest lingering clouds, cool air and sprinkles through the 24th, and then a cooler Canadian high back in for the balance of April. So, while the cool temps do not promote as fast of dry down, we at least see lower threats for new moisture in the extended period.