Clouds and rain linger this today, but in general, precipitation will be tapering off to nearly nothing as the day wears on. We are less concerned about precipitation today but can’t wave the all-clear flag just yet. Totals today likely are no more a few hundredths to a tenth or two with coverage at 40% or less. Most of this is wrap around action, coming behind the strong low and the front that moved through the region. Yesterday’s rains were not that impressive through the day, but we ended up with nice totals from late afternoon through the evening, particularly in the northern part of the state. That coverage bias was good, though, as the northern areas missed out on Monday rains.

High pressure takes control tomorrow, nosing in from the west and northwest. This will bring nice, dry weather the state not just for tomorrow, but on through the end of the week, the weekend and early next week. We should be cool tomorrow as the sun works through, and then see temps climb steadily to near normal levels by the start of the weekend, and then above normal levels later this weekend into next week. South winds will develop on the backside of the high, facilitating the warm up.

We still have a front and some moisture on the way for Tuesday of next week, but the wave is losing strength, and coverage is significantly lower. We will keep rain totals right now at .25”-1” over 60% of the state, but we will admit straight up that most of the state will be between .25”-4” if you see rain at all. The upper half of the range will be limited to those areas that see thunderstorms, and right now those thunderstorm chances look to be relatively minor., We will continue to watch central to northeast Indiana as hot zone areas for thunderstorm development next Tuesday, but this action looks largely hit and miss.

Dry weather is back as soon as Wednesday morning to midday, and we are dry through the rest of the 10-day period. For the 11-16 day forecast window, we have dry weather with minor high pressure in control through the 12th. For the 13th we have scattered showers coming in from the west and they linger into the 14th. This morning we will keep rain totals at .25”-.75” with coverage at 60%. 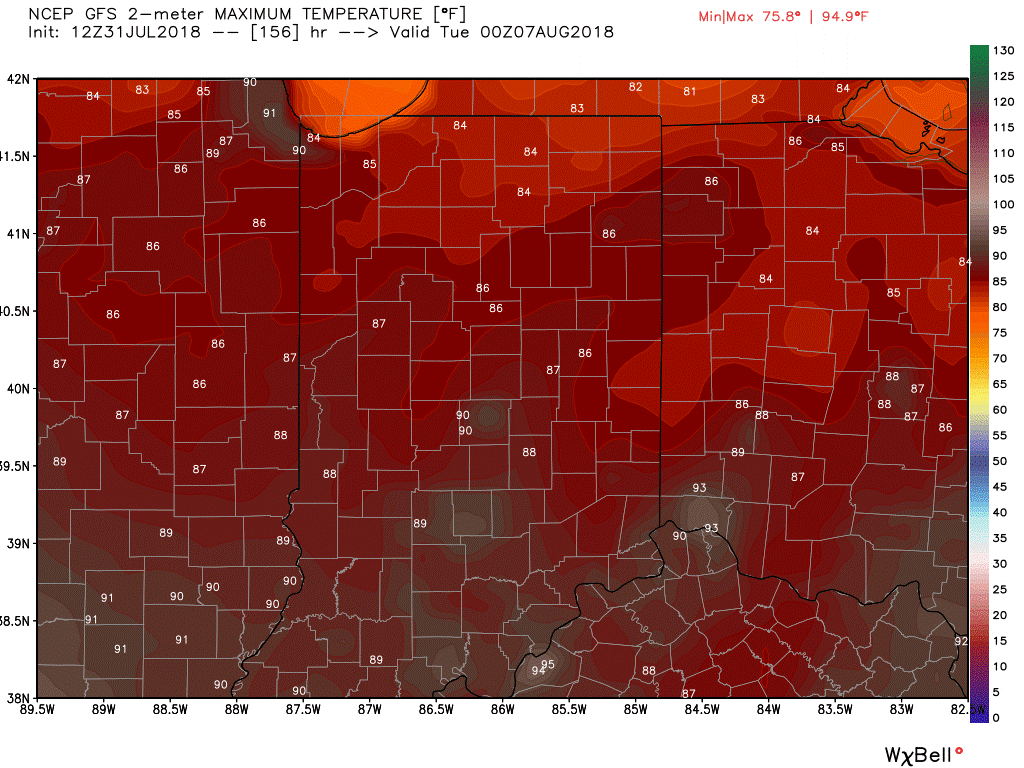 The biggest story for agriculture by far will be temps next week. We are calling for highs to be above normal all week, and compared to the past 2 weeks, it will feel very hot. We look for highs next week to be 88-93. We think humidity levels will be lower, though, so we still should be less extreme than what we saw back in early July near the Independence Day holiday. But, be ready to hear more headline chasers tell you how extremely hot it will be, not just here, but across the corn belt in general. The map above shows high temps next Tuesday afternoon.