Straight to the point this morning: there is still plenty of moisture around for crops. After heavy thunderstorms hit last night, we will see lingering moisture over the northern part of the state today. Tomorrow that shower action focuses more on the southern half of the state. While general rain totals will be under half an inch, the propensity we have seen for thunderstorm development cannot be ignored. Some of the storms in northern Indiana last night put down over 2 inches in short order. This atmosphere still has plenty of water in the column above…so while the heavy rains would be very isolated, there is no way we should rule them out over the next 2 days.

The only change in our forecast this morning centers around moisture for Monday. We are mostly dry Sunday, and now we see Monday’s moisture pushing a bit farther east and concentrating more over Ohio than here. We won’t rule out a hit and miss shower over a few areas either day, Sunday or Monday, but we think that more of the state will be dry than anything else. Dryness holds through Tuesday.

Rain and thunderstorms return for Wednesday and the precipitation could linger into early Thursday. We are leaving our rain totals at .25”-.75” over 90% of the state. But, as we mentioned earlier, thunderstorms and strong ones at that seem to have had an easier time developing recently in our current atmospheric setup 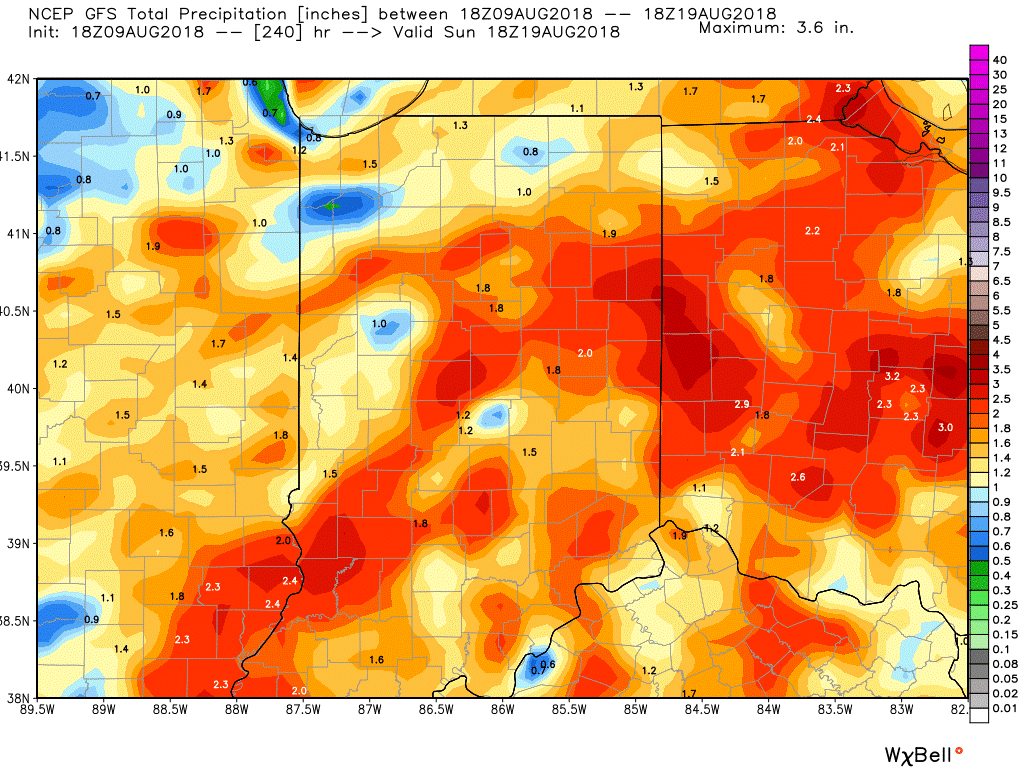 . So, we think it will be relatively easy to see some isolated rain totals over an inch. But, we are not going to go way off the deep end, like the European model continues to do. We will revisit this storm complex Monday morning and make any changes in strength, track and timing if any other models begin to side with the Euro. Right now, we think getting a strong, low-pressure circulation over the state triggering heavy rains everywhere is less likely than hit and miss strong to moderate action. The map above shows potential rain totals over the next 10 days combined.

We will keep scattered showers in for Friday with only 40% coverage. These may bring up to a quarter inch of new precipitation. But, we are going dry for the entire weekend next weekend, the 18th and 19th. We also are dry for the 20th. For the rest of the extended 11-16 day forecast period, we have scattered showers for the 21st through the 24th, a pattern very similar to what we are seeing now.