Mostly dry weather in over Indiana today. We can’t completely rule out a shower in one on two spots, but the action looks to be rare enough that we don’t think it is worth a mention in any “official” forecast. Tomorrow looks mostly dry as well, meaning we start this week off on a fairly pleasant note.

Showers return on Wednesday, but we really do not feel the full effect of our next frontal passage until later Wednesday night and Thursday. Scattered showers Wednesday will range from .1” to perhaps half an inch in spots, but we are putting coverage at only 30-40% of the state at this time. As the cold front arrives overnight Wednesday night and slides through Thursday, we see an additional .25”-.75” over 90% of the state. That will be the main rainmaker for this week.

The daylight hours should be dry for Friday, but we have a second front that looks to rip into the region overnight Friday night. By midnight, we will see rain and thunderstorm action over the western part of the state, and while the heaviest action dies out by sunrise Saturday, scattered on and off moisture can linger through the entire day. We will put rain totals mostly at .25”-.75” over 90% of the state but will allow for a few areas in NW Indiana to push closer to an inch of rain because that is where we see the best threat for strong thunderstorms at this time. There is plenty of time for that location to shift though, so stay tuned. 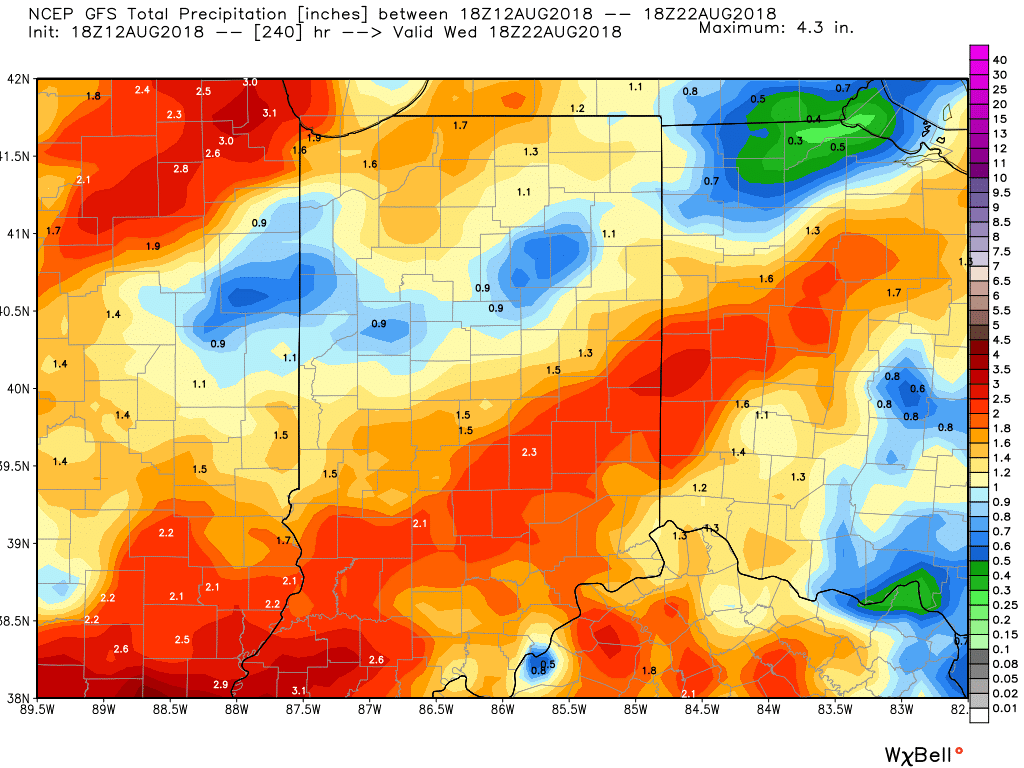 Sunday and Monday will be dry with sunshine and high pressure in control. Then we finish the 10-day period with a nice system for next Tuesday the 21st through Wednesday the 22nd. This system has at least .25” to 1” of rain potential with it at the moment, and a few models are really trying to ramp up strong to severe thunderstorm action overnight Tuesday night and Wednesday. If that were to happen, that would dramatically increase rain totals in those areas, but for now, we think it is too early to get overly bullish on heavy rains. It is something we continue to monitor. The map at right shows potential rain totals through the coming 10 days.

In the extended forecast window, we have a similar kind of set up. We will be dry for a couple days, and then have chances for scattered showers. We actually see 2 waves in the 11-16 day forecast period, one that brings half an inch or less to about 60% of the region, and then one near the end of the period, around the 28th-29th that has the potential to trigger half to 1.5” rains.

Temperatures will be nearly normal this week, which means we continue to get just what we need on heat units. Temps may go slightly above normal late this week, but rains over the weekend likely pull us back to near normal overall for the last part of the 10-day period. The rains can be seen as nothing more than “timely” at the moment…with just what we need on a fairly regular basis into late August. We likely put enough moisture into our atmospheric profile from late July into early August to keep any massive dry push at bay.