Today looks similar to yesterday in nearly every way, shape and form. High pressure drifts right over the top of the state today, centering on central and southeastern IN. This will keep temps pleasant, and sunshine dominant. As we transition onto the backside of the high tonight, south winds pick up and funnel warmer, more humid air back into the region. This will set the stage for our next round of precipitation. 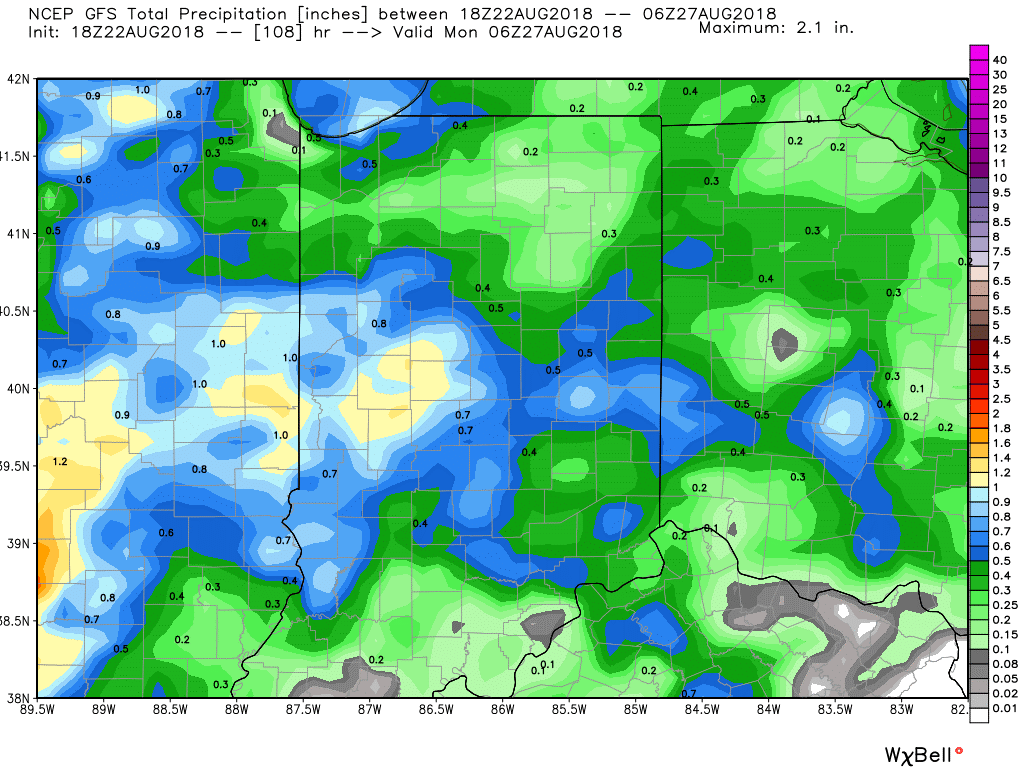 We see clouds increase overnight, particularly after midnight, and we are now confident that we will see rain in here faster on Friday. In fact, we can see rains moving into western Indiana by midday and then moving east and south. As the moisture spreads, it also falls apart, so that coverage is not overly spectacular. With the rain coming in sooner, there is a good chance it leaves sooner. However, we are still leaving scattered showers in the forecast for Saturday and even Sunday, with the bigger frequency and coverage out of those two days coming Saturday. We also are not ruling out thunderstorms yet, especially Saturday, but they still seem to be widely scattered. We will put combined rain totals for the 2 and half day period (Friday afternoon through Sunday) at a few hundredths to a quarter of an inch on the low end, and .75” on the top end. If thunderstorms do develop, 1”+ spots of rain would be possible in highly isolated areas. These thunderstorms will not be a feature that a lot of people get…the atmosphere looks much, much more stable before this boundary moves in, and will not be a good catalyst to convective action. The map above shows a cumulative rainfall estimate for the period from Friday through midnight Sunday.

So, with the precipitation moving in sooner, we are in fact going to move it out faster. We are going dry in our forecast now for next Monday and will continue to project the dry pattern through the rest of the week. We are looking for our next minor system to arrive next Friday, the 31st, but it also looks to affect only far northern areas. We will keep an eye on scattered showers for next Friday from US 24 northward, but the southern drive of this system seems to be waning, and that could lead to the dry weather holding all day Friday in central and southern Indiana. Up north, there could be up to half an inch of scattered showers, with coverage at 50% of the area from US 24 northward.

The extended period we are less keen on precipitation around the Labor Day weekend. There likely still is a boundary there, but if we end up going drier for most of next week, we think it will be more difficult to source moisture in the atmosphere for any kind of mediocre front, which the Labor Day system seems to be trending toward. Before taking action completely out, we will just pull amounts back, as the front is still nearby, and also pull coverage back to nearly 40%. Rain totals will be no more than a few hundredths to half an inch as it stands right now. With no changes in the dynamics of this system, look for that to dwindle in future forecasts. The rest of the 11-16 day window should be precipitation free.

Pleasant temps in the short term, and we climb to near normal levels for the weekend and early next week. Later in the week if south winds roll back in, a move to slightly above normal levels is expected, but no excessive heat is likely.