Dry weather in for a couple of days here to start the week, but with south winds and the big bump in humidity we saw yesterday, it will not feel all that dry to most of us. We have no new precipitation in today, but temps will remain very warm. We expect afternoon highs to average 8-10 degrees above normal for today and tomorrow.

Rain arrives Wednesday to the state. This front coming through will bring anywhere from .1”-.8” of general coverage rain through the day. However, with the heat and humidity leading up to the front arrival, the “wildcard” will be thunderstorms. The conditions will be very favorable to storm development, and those storms can bring heavy rains. So, we are not completely married to that upper end of the range. In fact, the map below, which shows potential rain totals for the midweek system, even suggests some 1 inch plus totals. Recent history has shown that a large part of the state has been able to see heavier than expected rains from systems that move through. In light of that, for the time being, we are going more conservative with our rain estimates and will tell you that it likely will come down to who has the best moisture profile as the front comes in. 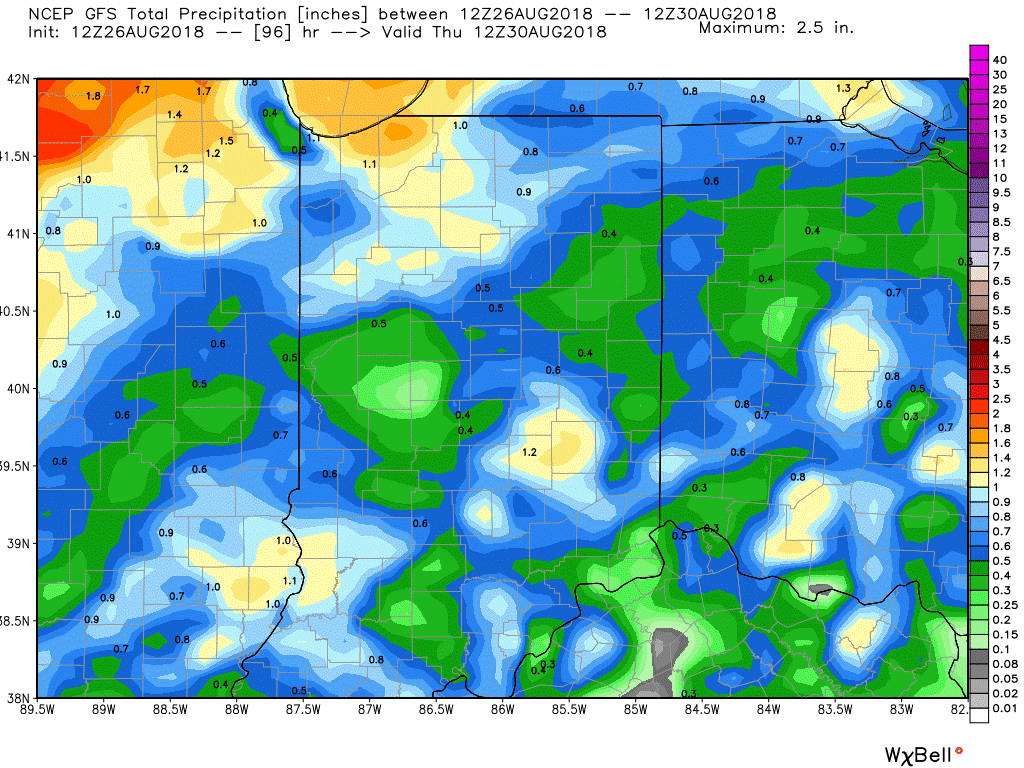 The system Wednesday kicks off a rather unsettled weather pattern for the rest of the week and into the weekend. We don’t necessarily see lots of additional moisture or frontal action in the period, but we also see just enough uncertainty to really not be able to take moisture out of the forecast on any given day. For Thursday, that means mostly the first part of the day into early afternoon. On Friday, we look more toward later afternoon, and mostly in southern Indiana. Overall, both days will see coverage at 40% or less, and rain totals of a few hundredths to a tenth or two.

For the weekend, Saturday looks warm and humid with nothing more than pop up showers, but Sunday, we are seeing signs of a minor disturbance coming over the great lakes, bringing better rains to the northern third of the state. On Sunday we expect .25”-.75” over 70% of the state from US 24 northward. But the rest of the state stays dry and very warm. Labor Day starts out dry, but by late afternoon showers and thunderstorms will be moving in over most of the state. Rain totals end up around .25”-.75” with coverage at 80%. These showers linger into early Tuesday. We should finally see a slight airmass change Tuesday afternoon, with high pressure working in.

For the extended period, we see that high moving off to the east relatively quick, and moisture starts to come up the backside. This leads to another unsettled pattern from next Wednesday night on through the rest of the 11-16 day window. We can’t rule out showers any of those days and we see increasing chances and frequency of moisture as we move through the period. All told, we see a potential of an inch or more of rain combined through the entire 11-16 day window, and we may finish it out near the 11th with a strong cold front poised to move through.

Overall this pattern gives the feeling that we are not quite as wet, at least in terms of the amount of moisture that comes in one sitting or out of each system. However, we think there is just as moisture for the period combined as our previous forecasts, but it is just spread out a little more. However, we are also seeing a lot more daily uncertainty. The past few weeks have seen most of our precipitation come from fronts that sweep across the entire region. Going forward, the fronts look to be not as substantial, but pop up action is more dominant. Temperatures through the next 2 weeks will end up mostly well above normal. We see heat building back in late this week and it holds through next.