Drier weather moves into the state today after a couple of days of damp, soggy weather. Rains were much more intense in some areas than others, with the Fort Wayne area reporting over 3” in spots yesterday morning, which came as a surprise to us here. In general, the action was hit and miss, and there are a number of areas that were disappointed with the rains over the past 2 days. In any case, our threat of rain diminishes dramatically over a large part of the state as we move through the next 10 days, and only slightly picks up in the extended 11-16 day forecast window. For today and tomorrow, we should see the return of sunshine over a large part of the state although temps will be cooler behind the front that moved through. There will be some transitional cloudiness out there, particularly tomorrow, as a minor through and dissipate boundary slips in over northern Indiana. We remain confident that it will not trigger any significant precipitation and just clouds over the northern third of the state. Farther south, full sunshine is expected tomorrow.

Harvey will make life a little interesting to finish the week. Sunshine is likely over most of the state for Friday, but clouds will be on the increase in southern Indiana as the day wears on. We continue to be convinced that at least some moisture related to Harvey is going to make it into southern Indiana, and we are honing in on the exact track. Right now, we like most of the core of the circulation to stay south of the OH river. But, we can see rains from late Friday through the overnight and through midday Saturday south and east of a line from Vincennes to Richmond. Rain totals closer to the river can still be 1-3”, but most of the rain areas, will be from .25”-1”, and the lower end of the range will be seen closer to that Vincennes to Richmond line. The rest of the state stays dry, and even mostly clear through Friday night and Saturday. The map above shows potential set up of Harvey’s remains Friday late afternoon. 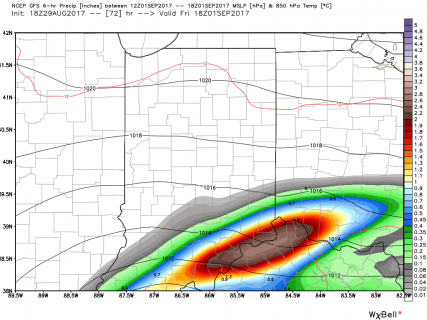 The rest of the holiday weekend features sunshine and blue sky with high pressure in control. However, the latest European model has attempted to bring a little more cloud cover and even some light showers in for Labor Day. This does not lead us to change our forecast at this time but is simply a point to watch going forward for any potential forecast changes. We think better-scattered shower chances may emerge next Tuesday, with a few hundredths to at most a quarter of an inch over about 60% of the state. This is not exceptionally well organized and we are thinking it could fall apart…but for now, we will insert it into our outlook for next week, especially since, it looks like this moisture is flaring up at the expense of a system we had originally been looking for a few days later around the 7th.

We look to dry back down for Wednesday through Friday of next week behind that mini system. In the extended window, two fronts seem to want to flank the state around the 9th and 10th, but the current set up would lead to them missing the region with most moisture. We think that solution and set up is likely still evolving, and we are electing to keep moisture around for the 10th with totals half an inch or less. A stronger front develops on the backside of an upper-level high-pressure dome for the 13th into the 14th with rains of .25”-.75” possible over about 70% of the state.

With regard to temperatures,…we have heard increasing questions about frost, and yesterday saw a meteorologist try and advance a threat of frost over parts of the western corn belt and upper Midwest next week, particularly Thursday. He was making his argument based on 5000-foot temps and a completely clear sky. We are not in that camp at all…no concern about frost out there, and there is no reason at all for anyone to project Frost talk here either. This was the same outlet that tried to advance a theory of the upper 30s over parts of IN and OH a couple of weeks ago too…which was nowhere close. What we mean by all of this is that you need to weigh things carefully. After seeing temps rise to normal and above normal levels as we finish this week, it will be cooler next week. In fact, we are now looking at below normal temps for a good chunk of next week. But taking it right to scaremongering about frost is not even close to being right at this point. Below are maps of morning lows on Thursday morning (left) and Friday morning (right) across a good chunk of the corn belt – according to the coldest model out there at 5000 feet at to this point. 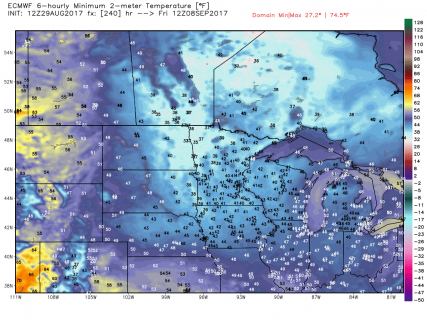 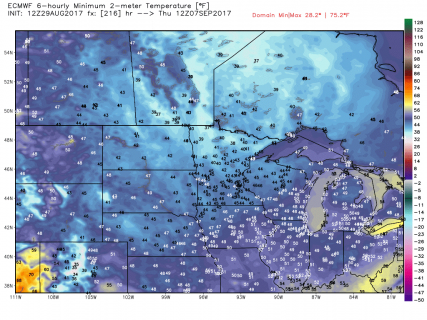