Winds have turned southwest to start the day today, but they will not stay that way for a long period. These southwest winds will help temperatures moderate a bit today, and we see a large part of the state over the freezing mark, with the southern half of the state pushing toward 40. However, wind goes northwest later this afternoon and that brings cold air back along with some possible lake effect snow in far northern Indiana. 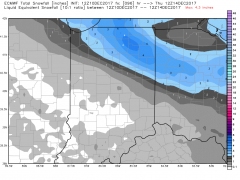 The lake effect snow continues off and on tonight through tomorrow but will be limited mostly to areas 50 miles either side of a line from South Bend to Winchester. Snows will be light, but persistent all through the day tomorrow. Outside of that zone, we expect nothing more than flurries here and there.

At midweek, we are dry to start Wednesday, but our next clipper system looks to arrive in the afternoon and evening. This fast-moving system brings another threat of snow to the state. However, unlike Saturday’s system that had a good southern push to it over Indiana, this one has a better focus on the north and east. The action develops in the northern third of the state Wednesday afternoon and then spreads south into west-central Ohio by evening. Snows can be from a coating to an inch or two. The snows really ramp up overnight in Ohio. The map above shows cumulative snow potential for later this afternoon through sunrise Thursday morning.

Thursday and Friday should be mostly dry with no frontal action moving in. There can be a few flurries in over the region here and there as cold air stays parked right on top of us. But, by Saturday we have good, strong southwest winds back, and that will help temps bounce a bit for the weekend. Temperatures Saturday and Sunday should max out in the upper 30s and low 40s.

We have a minor system moving across the southern half of the state overnight Sunday into early Monday. Precipitation can be a mix of rain and snow from I-70 southward, and we can see a few hundredths to .15” of liquid equivalent. Coverage will be 80% of the area south of I-70, and the northern half of the state sees basically nothing. Northern areas get their minor bit of rain ending as snow Monday night into early Tuesday. A few hundredths to .2” with 90% coverage north of US 24. Cold air returns behind that system.

In the extended period, we continue to see a significant front arriving late on the 21st into the 22nd. This system has the best moisture with it along and ahead of the front, meaning we should see predominantly rain, then changing over to an ending as snow. There should be good coverage over the state. Behind that, we are dry through Christmas weekend, with snow trying to develop out of an upper-level low coming through the great lakes Christmas night into the 26th.