We have a fairly calm start to the week. Yesterday’s precipitation was very underwhelming, and honestly, a little disappointing, given how solid the front looked moving in. We will be dealing with lingering moisture through the day today, and in many cases, today will look similar to yesterday. However new moisture is not impressive, so with the clouds we are only looking at minor precipitation, spits and sprinkles here and there, for a total of no more than a few hundredths to .15” over 40% of the state. 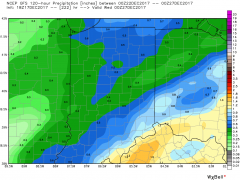 Tomorrow, Wednesday and Thursday look dry with better sunshine potential. Temps remain normal to above normal and we will see no snow left anywhere in the state by late this week (there is only minor snow cover remaining in northern Indiana as of this morning anyway, a lot of which was in areas that have not been able to see as much sun. We see good west winds through the period, with a turn to the strong southwest not likely until late in the week.

On Friday, we see those southwest winds develop, and clouds build quickly. However moisture is slower to arrive and we are projecting now only a few hit and miss showers for Friday during the day. Much better moisture fills in overnight Friday night through Saturday the 23rd. Through Saturday midday we can see .25”-.75” over 90% of the state. Some models are trying to put much heavier rain in over southern Indiana with thunderstorms, but we are not going there yet. This Saturday precipitation will be the start of what could be a very interesting holiday weekend.

The balance of Saturday and most of Sunday will be dry, but colder air tries to come in from the NW. Meanwhile, moisture continues to flow up the old, stalled frontal boundary sitting to our south. Eventually, Christmas Eve night we see this moisture surge back north, covering most of the state by Christmas morning. Cold air maintains its advance from the northwest, setting up a potential Rain in the south changing to snow in the central and to light snow in the north kind of set up for early Christmas morning. And, the precipitation continues through Christmas day, adding to snows in the central and north. The precipitation finally leaves Tuesday the 26th, by midday. It is way too early to project where heavy snows and problem spots will be, and we expect the track of this system to change over the next few days. But, this is the “headline event” of the weather over the next 10 days, especially since it dances around Christmas itself. The map above shows total precipitation from the 22nd through early the 27th. This will have rain, but some of these totals can be snow, depending on where the cold air set up and when!

Behind that system, the bitter cold air is coming in and parking over the state. Temps will be well below normal through the turn of the month. WE should be mostly dry through the extended window, but a strong complex developing in the southern plains needs to be watched for the New Year’s weekend too…as that is an area we watch closely for winter storm development.