Strong winds are in over the state today out of the southwest. These winds are in advance of a cold front that should sweep through the overnight night tonight through the first part of tomorrow. We should see clouds increase through the day, but at this time we are not overly concerned about moisture before the front itself arrives. When we finished last week we had some concern about some minor moisture trying to work through far northern Indiana this morning and midday. That concern is gone now. We won’t rule out a spit or sprinkle in one or two places, but good, organized moisture will not be around until later. The strong winds will be at least 15-30 mph sustained today and will take temps well above normal one more time. 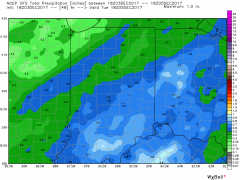 The cold front comes through tonight and will bring precipitation from after midnight tonight through tomorrow morning. Action should be out of the state by noon or before, meaning we are looking at roughly 8-12 hours of precipitation potential, and that is about it. In that time we should see .25”-.75” rain totals with coverage at 90% of the state. The map above shows rain totals through tomorrow at 1PM. However, the upper end of the range likely is going to be hard to see verified. The biggest thing that can promote those upper range rains will be stronger showers or even a thunderstorm. The national severe storms center says we have a marginal risk for strong storms tonight.

Behind the front tomorrow afternoon we will start to feel a dramatic change in temps. In fact, we are going to be heading to normal and below normal levels for the second part of the week. But, the flow pattern for Wednesday through Friday is more west than north, so that will do two things. 1: We will not see quite as cold of temps as we would with the direct north flow. And 2: we do not have the concern about lake enhanced clouds and precipitation in here for the period either. That should allow slightly better chances of sun for rate period, even though we are going to see a significant temperature correction for the time of year.

The weekend and rest of the 10 day period also look dry. High pressure will be in and we do see brutal cold for the weekend, with temps well below normal on Saturday and Sunday. But, we will be precipitation free. An upper level low moves in over the great lakes for next Thursday, the 14th, and it will bring some precipitation threats. We can see a liquid potential of up to .5” over 80% of the state. We will have to wait until closer to the event to see what kind of air mass we are dealing with, but we would trend toward south flow allowing for rain to start and perhaps ending as snow. The rest of the extended period is mostly dry, with a mix of clouds and sun, and temps near to slightly below normal.