Our forecast remains largely unchanged this morning. Cold air holds through the coming 10 days and if anything, we see a slight uptick in our snow chances.
Northwest winds are in over the state today and that will be triggering some lake effect snow potential over northern tier counties in Indiana, mostly Laporte, St. Joe, Elkhart and Lagrange, along with parts of Kosciusko and Marshall. The rest of the state will see cold air with clouds and sunshine. We may see a few flurries push into far northeast Indiana too. Tomorrow we see more sun, and winds start to move back to the west, even southwest. 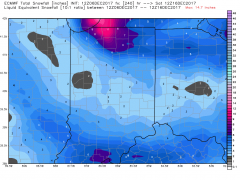 Snow chances are greater now for Saturday. We have lake enhanced snows up in far northern counties as a quick moving clipper like trough moves through the northern half of the state. WE can see some minor accumulations from US 24 northward, and even a coating with some snow showers down toward I-70. A reinforcing shot of cold air will back up this snow potential that lasts all day. For Sunday we are dry over most of the state with mixed clouds and sun, but strong north winds mean we can’t rule out lake effect snows and flurries over the northern third of the state.

Monday starts with sunshine, but northwest winds bring snows back to the areas north of US 24. We could see minor accumulations there again, while farther south there is no precipitation threat. Temps remain below normal for this time of year. On Tuesday we don’t see a large precipitation threat, but can’t rule out flurries over about 20% of the state.

We still have another clipper system in for midweek next week, but it is getting pulled into 2 pieces. The first piece brings snows with minor accumulation potential to SW and south central Indiana for next Wednesday morning and midday. The best snows will be along a line from Danville, IL down through Jeffersonville, and then back to the southwest. By Wednesday late afternoon and evening, we see the second piece starting to kick off over northern Indiana and it lingers through Thursday. Precipitation totals may not be as big, but the lakes can enhance snows, especially north central and northeast. Still, the map above shows cumulative snow total potential over the coming 10 days. These kinds of totals mean that the snow will be very gradual through the period. We see scattered little bits of action here and there, more nuisance than anything else but it adds up.
Friday lingering snow flurries will be around, but we do see some sun. Another push of cold air may bring our first potential subzero temps to northern Indiana next Friday morning. The extended period still does not have anything of major significance until we get closer to the 18th and 19th.