After good lake effect snows in the northern part of the state yesterday, we take a bit of a break today, with winds pushing back to the west. Sun will mix with clouds through the day, but cold air is still the main feature. 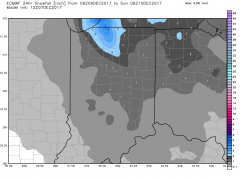 A clipper system continues its path towards us for tomorrow. We will see this clipper interact with lake breezes to trigger some good snows across parts of the state. Right now, we look for the potential of 1-3 inches with 60% coverage north of US 24, away from the lake. In typical lake-effect areas, we can see those totals significantly higher, perhaps up to 6 inches in Laporte and St. Joe counties. From US 24 to I-70 we can see a coating to an inch, with 60% coverage, South of I-70, we can see light snow and flurries, and perhaps a nice dusting in spots, but coverage will be 40% or less. Winds may cause snow to blow and visibility to be slightly lower, but still, we do not expect major problems. The map above gives some ideas about snow potential for tomorrow. We finish the weekend on Sunday with very little new snow. We can see some additional lake effect flurries in parts of northern Indiana, but coverage will be very spotty. Clouds will mix with a sun, in the vast majority of the region. Winds turn southwest late in the afternoon.

Monday could be an interesting day. Those southwest winds will have helped temperatures enough that we may be able to see most of the state above 35 degrees. However, we see a return of WNW winds through the midday hours and some lake effect snow may start to develop again in NE Indiana by mid to late afternoon. Most of the state should be in good shape though, for the start of the week. Overnight Monday night and Tuesday, we have scattered light snow showers over the northern and eastern parts of the state, and just some clouds in other areas. Coverage for that day will be about 40% of the state, but snows yield little to no accumulation, except in lake effect areas.

Our midweek clipper has dramatically dissipated and will likely only trigger some clouds on Wednesday into Thursday. However, a weak trough does move through the great lakes to start off next Friday and brings snows back to areas to areas north of US 24. Minor accumulations are possible there, mixed clouds and sun farther south. The cold air is a constant all the way through the period.

The weekend looks to be dry at this point, and southwest winds for Saturday may take temps back up to normal and slightly above normal levels. However, colder air begins to return next Sunday. In the extended period, an upper level low moves across the Great Lakes to start the week of Christmas and may bring some snow showers back to northern Indiana. But, we are more interested in a strong frontal complex sweeping through around the 21st. This front has plenty of moisture coming up off the Gulf, and will likely bring rain to start, changing over to snow. Liquid equivalents with this frontal complex will be up to at least half an inch, and coverage will be 100%. We think it is completely within the realm of possibility to see a couple of inches from that system as it sits right now, and perhaps more if it holds together and cold air comes faster.