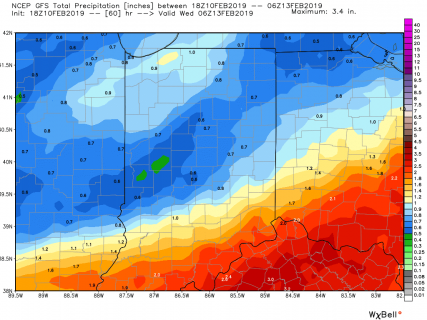 We have a very active pattern over the state this week, starting today. We have rain and snow from I-70 southward, with the moisture slowly lifting northward through the day. By sunset, action should be approaching US 24. Moisture over the southern half of the state will be from .25”-.5” with coverage at 100% of the region, while we expect a few hundredths to .25” between US 24 and I-70 with 75% coverage. By tomorrow morning we have rain from US 30 southward, and some wet snow north of US 30. That quickly transitions to rain statewide by mid-morning to midday, and then rain continues through sunset. After sunset tomorrow, we would not be surprised to have rain change back over to snow before ending. All told, we think tomorrow we have potential for half to 1” liquid equivalent precipitation totals, with some of that coming as a coating to 2 inches of snow to start the day north of US 30, and then another coating to 3 inches of snow overnight tomorrow night, with the best potential in north central, NE and east central Indiana. Generally speaking, this is most easily summed up as “a mess”. The map shows potential cumulative precipitation through midnight tomorrow night.

We expect a mix of clouds and sun Wednesday behind this event, but we are not as concerned about cold air now. Temps likely end up near normal for midweek, and we see partly sunny skies for Thursday.

Friday has become much more problematic. We have a significant low moving across the state, and as it comes through, it has the potential for half to 2” liquid equivalent precipitation, but that could come as rain, freezing rain and or snow. The event changes over to snow late on Friday, and that is where significant snow totals could develop. However, right now, we are not stepping out in any specific direction on this event. It looks formidable in any form, but what we get and where we get it depends entirely on track, and it is too far out to really get a good idea on that at the moment. Stay tuned!

Windy and colder for Friday, so any snow that would fall on Friday would be subject to blowing and drifting through the day Saturday. Temps will be well below normal and we will see wind chills as a problem again. We stay cold for the balance of the weekend through Monday, with partly sunny skies. Some sub zero lows are likely for the morning of Presidents day.

Tuesday the 19th we have minor snows moving through, bringing a coating to 2 inches with 70% coverage. Then we turn partly sunny and colder again for Wednesday the 20th. While we are keeping our forecast relatively conservative for those days, other models are trying to bring a much more interesting solution to the table, with snow in far southern Indiana for Tuesday, and then rain south of I-70 on Wednesday and snow north. We think that is overdone and will stay with a more subdued outlook at this time.

For the extended period, we have flurries for Thursday the 21st, then partly to mostly sunny skies for Friday the 22nd through Sunday the 24th. Colder air with another snow event arrives for Monday the 25th and goes through Tuesday the 26th. Accumulations are likely.