No significant changes in our forecast this morning. Temps today should be a little better than yesterday, but we are waiting until we get into tomorrow to see large jumps in our high temps. Today, we should just be getting back near normal for this time of year. Southwest winds develop through this afternoon, and that gives a signal that this warm-up is just beginning. Clouds will likely start to develop later this afternoon and tonight. Above normal temps will be seen tomorrow, and we have to keep an eye out for some minor precipitation. We won’t rule out a few scattered showers over the state, particularly late tomorrow afternoon and tomorrow night. Rain totals will be a few hundredths to .4” with coverage at 70% of the state. 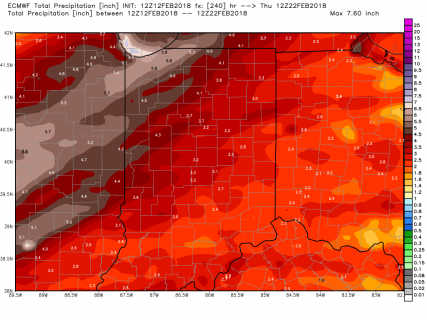 The second wave of action pushes in from the west and southwest Thursday afternoon and evening and goes through Friday. This will be where we see more significant moisture. We are looking for a half to 1.5-inch rains from over 90% of the state from Thursday afternoon through Friday early afternoon. While we do not have as big of concern about thunderstorms, this will still be an impressive batch of water, and we still think that there is potential for localized flooding, particularly in areas with significant snow melt and frozen ground as of today. The focal point for the heaviest rains has shifted this morning a little farther east. Ohio may actually end up wetter than we do here in Indiana

Much colder air comes in behind that system to start the weekend. However, it does not last long term. A cold night is expected Friday night, leading to a chilly start on Saturday. But, west and southwest winds are back in the state by midday Saturday, and we should see temps move back to near normal levels for Saturday and above normal levels than for Sunday. We will be dry through the entire weekend.

Next week is damp, with scattered showers likely from overnight Sunday night through next Friday. Several waves of light moisture will move through. While Ohio may be on the hook for the heavier rains later this week, we look to take the brunt of next week’s rains in Indiana. Rains overnight Sunday night into Monday can bring .3”-1.25” over 100% of the state. Then, after a slight, cloudy lull overnight Monday night through the first part of Tuesday, we have heavy rains back for Tuesday night through Wednesday. We can see rains easily of 1-2”, and locally higher amounts over the northern half of the state are likely. This also has the potential to trigger some significant flooding, especially up north, where significant snowmelt will either be underway at the time or will be nearly finished, saturating a partially frozen soil profile. Temps will be mostly above normal all of next week, leading to increased rain potential. This is a wet upcoming pattern. The 10-day cumulative rain totals map is updated above. Much colder air comes in behind that frontal boundary for late in the week, Thursday and Friday.

In the extended period, we likely see a clipper for Sunday the 25th. That fast-moving system can bring some scattered snow, or perhaps some rain mixing with snow. The much stronger front remains targeted for the 26th and 27th, bringing liquid equivalent precipitation of half to 1.5” over the entire state. Right now south flow ahead of that system would indicate rain potential, but the timing of the cold air arrival will be the key going forward.