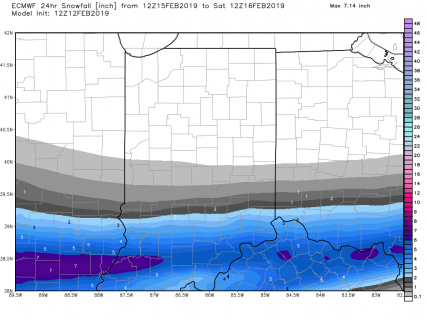 Windy conditions dominate as we start off today, bringing colder air in over the state. We continue to see light snow over the northern part of the state, and that snow will be ending by midday in most area. We won’t rule out fresh coating to half an inch this morning in areas from US 24 northward, but that snow will be ending from west to east. Blowing snow may end up being more of a problem than fresh snow up north today. We should see partly to mostly sunny skies elsewhere today, and that same sky condition behind the snow as it ends in the north. Wind will subside this afternoon. We stay mostly sunny tomorrow, but chilly.

On Friday, we see clouds increasing statewide. A southern track for the low pressure system we have been talking about all week is starting to take shape. However, it also is delaying its arrival just a bit, so clouds build through the day, first in the south, and in the afternoon likely up north. Still, the northern third of the state probably ends up with a fairly decent day on Friday. Snow develops from I-70 southward for Friday evening through sunrise Saturday morning. We expect a coating to 2 inches from I-70 down to a line that runs horizontal through Bloomington. From Bloomington southward, we see anywhere from 2 to 8 inches, with the heaviest snow near the Ohio river. There is nothing north of I-70, and all of this happens Friday evening and overnight. By 9 AM Saturday…everything is gone, leaving just cold air in its place. The map gives an idea of the current thinking on snowfall, but we think there are higher totals a little farther south.

Windy and colder for Saturday, with partly to mostly sunny skies emerging. On Sunday, clouds are back, and we will see some light snow. We expect a coating to 2 inches over 70% of the state through Sunday. Monday will be mostly sunny and cold for President’s Day. We still expect some sub-zero lows for the morning of Presidents day.

Tuesday the 19th clouds increase. Snow develops in central parts of the state mid to late afternoon with rain farther south. Then the snow spreads north through the overnight and into Wednesday. On Wednesday snow will be ending, but not before leaving some additional accumulation in the far northern part of the state. We think that most of the state from US 50 northward can see 1”-3” of snow combined for the Tuesday-Wednesday AM period, and areas from US 24 northward may add another coating to an inch early Wednesday before the snow ends. Clouds will give way to sun for the balance of Wednesday. Thursday and Friday turn out mostly sunny.

In the extended period, a quick burst of snow can fall in the overnight next Friday night into early Saturday, bringing a coating to 3 inches to the northern part of the state, nothing south. Then we see rain from Sunday afternoon through Monday, with liquid equivalent precipitation totals of .25”- .75” and coverage at 90%. Colder air follows that system, and we could see snows over the northern part of the state for late the 26th and again late the 27th.