We are going to need to keep the umbrella, galoshes, and floatation tires at the ready over the next 10 days. We are going to swing quickly from cold and snowy to mild and very, very wet. In addition to massive snow melt in northern Indiana, we see several strong waves of moisture moving through for the period, and they can dump plentiful moisture.

Starting things off, a relatively minor wave of moisture started working into areas south of the Ohio River late yesterday and threw a lot of clouds up across the state. We will see scattered showers off and on today, as temps warm. Snow on the ground over the northern quarter of the state will act as a bit of a refrigerator, but we still expect a mild day, and plenty of snow melt there. Rain totals will be a few hundredths to a quarter of an inch, with coverage at 50% or less. 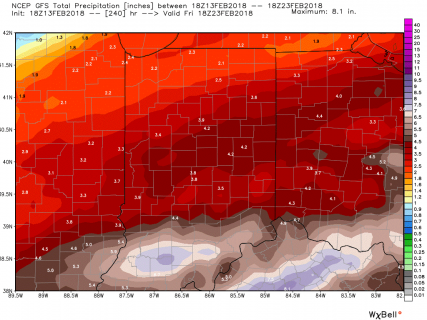 A second wave of action pushes in from the north and west tomorrow evening and through Friday. WE continue to see significant moisture with this front, and it will hit nearly all of the state. We are keeping our general rain totals at 1-2 inches, and if an area fails to get to that range, you still can see .25”-1” there. The 1-2 inch range should hit 75% of the state. Action will be done by late Friday night, and colder air comes in for about 12 hours.

Temps bounce right back for Saturday afternoon. We won’t be as warm as the prior few days, but still should be above normal. The main hiccup in our weekend is the potential for scattered action to return late Saturday night into Sunday. We don’t think this is exceptionally likely at this stage, but we will watch it and make changes to the forecast tomorrow if we get some confirming data.

With or without Sunday moisture, next week still looks very wet. Rains come Monday, Tuesday Wednesday and early Thursday. Combined totals for that period could be 1.5-3”! That does not include what we see in a few days here. So, localized flooding, standing water, and a greasy mess are all in our forecast between now and the end of next week. The map below shows a potential cumulative rain moisture total from now all the way through next Thursday.

In the extended period, we are watching for our next system around the 25th. We are not sure that air gets cold enough quick enough to call this a true clipper. However, we do look for colder air later in the month, with a strong system crossing the eastern Corn Belt between the 27th and the 1st. This storm right now looks to focus a bit farther south, over southern Indiana and south of the Ohio River. But, there is plenty of time for it to lift northward. An even bigger system comes out of the plains for the 2nd, meaning march appears to want to come in like a lion!