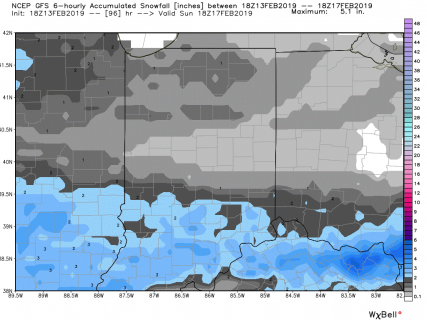 Not a bad day today with sunshine returning for a second straight day. We probably do see another windy day today, but those winds will be from the southwest and will bring some slightly warmer air. Still, before you get too excited, that warmer air is still chilly, and the winds will make it feel worse than it actually is.

Tomorrow will be a bit of a transition day ahead of our next weather system. The northern half of the state stays with the status quo…at least partly sunny skies and no major problems. The southern half of the state sees sun to start, but clouds increasing through the afternoon. Low pressure is on a track to move from the central plains through the Ohio Valley and out through the DC area by the time all is said and done. That keeps precipitation on a southern track. Snow develops tomorrow evening and then continues overnight and in to Saturday morning south of I-70. There is no precipitation threat north of I-70. We expect snows from that period to run from a coating to 2 inches from I-70 down to US 50, and then from 2-6” from US 50 southward. The higher end of that range will be in SW Indiana, near the river. We turn partly sunny for the balance of Saturday. Milder air tries to work into southern Indiana, perhaps enough to melt everything rather quickly. However, northern parts of the state stay cold. The map above is less threatening than 24 hours earlier.

Scattered snow showers move through on Sunday, but we are pulling coverage back just a bit. We expect a coating to 2 inches of snow over the region with 60% coverage. This will all be very light snow, more of a nuisance than anything else. Partly sunny skies are back for Monday, as a reinforcing shot of cold air is on the way.

Clouds increase through the day Tuesday. Our next well organized system shows up late Tuesday afternoon and evening, with precipitation extending through most of Wednesday. There is an expectation that we end up with snow for that window from I-70 northward, and rain down south. Snow totals can be 1-3” up north, while we pick up a few hundredths to a tenth or two of rain in the south. The biggest thing to watch with this system will be coverage. Right now, we see about 70% coverage, but better coverage on the snow than the rain. Track of the low and warm air will be key. We see clearing move in for Wednesday afternoon and Wednesday night. Thursday and Friday will be dry with plenty of sunshine.

For the extended period, we have scattered snow showers for Saturday the 23rd with the potential of a coating to 2 inches of accumulation. Then after dry and sunny, yet chilly period for the 23th-25th, we have clouds increasing for Tuesday the 26th. Rain starts that Tuesday late afternoon and evening, and then we finish with snow. There can be .25”-5” of rain Tuesday night, followed by at least 1-3 inches, but it is way to early to start really getting concerned about this system. We go partly sunny again behind the system Thursday and Friday to finish the month and start March.