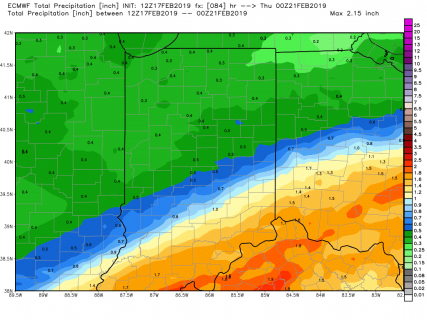 Light snow lingers across northern Indiana this morning, but should wind down rather quickly, before noon. We do not expect any accumulation of consequence. The rest of the state and the rest of the day will be just cloudy and chilly, as north winds continue to flow across the eastern corn belt. High pressure will try to move over the Great Lakes and the northern parts of the state overnight into tomorrow morning, so we do have a chance at seeing a little bit of sunshine early in the day tomorrow, but clouds quickly return and then increase through the balance of the day. We have a significant weather system on the way for midweek.

Cold air will be sufficiently far enough south to allow for a large part of the state to see precipitation start as snow on Wednesday morning. In fact, we see the potential for some significant accumulations out of this event. From US 24 northward, we can see a coating to 2 inches Wednesday. From US 24 to US 50 amounts of 2”-6” can pile up, and south of US 50, we can see a rain-snow mix, or even predominantly rain for the event. This will be very wet snow in areas that see snow. The snow is likely done by midday or early afternoon, changing over to rain. We can see an additional few hundredths to .3” of liquid before everything is done Wednesday evening. There is big potential for this to be an absolute mess. The maps show the potential liquid equivalent totals and event snow totals the way we see them this morning. 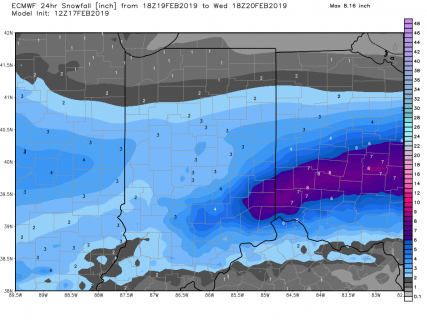 Clouds do give way to some sun on Thursday, and we see partly sunny skies hold for most areas through Friday. The only exception may end up being in far southern and southeastern parts of the state Friday afternoon and evening, where we may end up with a few scattered light rain showers. Temps for Thursday and Friday will end up near normal…temps chilly, but not bitter cold.

Another big batch of moisture remains on track for the weekend. We are putting rain in the forecast for both Saturday and Sunday, although we will grant that Saturday will have most of the rain focus south of I-70. Sunday will feature the heaviest rains and full state coverage. For the two days combined, we expect .5”-2” rain totals with coverage at 100%. Rivers and creeks will continue to run full, and localized flooding is likely. Sunday will also feature very gusty winds, averaging 20-40 mph statewide.

We turn colder for the first couple of days next week, but we still are not that far below normal. Partly sunny skies are expected. We can’t rule out a chance of some light snow in northern Indiana next Wednesday, but even that does not look to be nearly as impressive as our next two systems this week and weekend.

The extended 11-16 day forecast suggests a significant move colder as we start off the month of March. Next Thursday through the following Monday we see much colder, well below normal temps across the entire state. That airmass, along with good strong north winds, will produce some lake effect snow chances for the first weekend in March, the 2nd and 3rd. A much broader coverage snow event is showing up for the 5th bringing a coating to 2 inches, with nearly full state coverage.