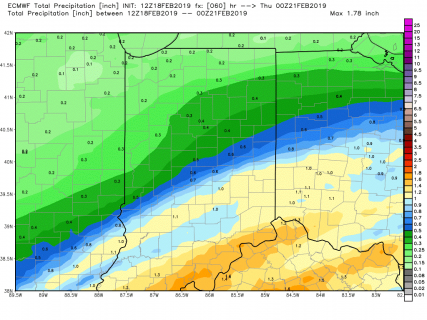 Today is the easy part of the forecast. High pressure is passing by to the north this morning, moving across southern lower Michigan. It will end up over Lake Erie and north central Ohio by mid to late morning. We should see sunshine for at least part of the day, but clouds will be increasing this afternoon ahead of our next storm complex. This storm is growing in intensity and will be putting down wet snow back in the central plains and MO valley today.

Cold air will be sufficiently far enough south to allow for a large part of the state to see precipitation start as snow overnight tonight. The moisture spreads north, but so does warmer air. By sunrise, we see the freezing line up to about SR 32, and by midday the freezing line is all the way to the IN-MI line. That means we see snow changing over to rain rather quickly. However, there still is potential for accumulation of heavy, wet snow at the outset of this system. From US 24 northward, we are looking for a coating to 2 inches. From US 24 to US 50, we can see 2 to as much as 5 inches. However, here is the problem. We also have a concern about ice in that central Indiana area too with the changeover. Our main concern is warm air coming in faster at higher elevations than at the surface, and that creating some freezing rain. That would lessen the potential for the 4 or 5 inch snow totals but open up a whole lot of other problems. So, we are saying to be on the lookout for Ice. It can be a mess either way. The entire state is changed over to rain by midday, and then we can add another .25”-.5” of liquid before everything is done in the evening. The total liquid equivalent precipitation for this event will be from .25”-1.1” over the entire state, which the map shows.

We are dry for Thursday and Friday and should see some sunshine for that period. However, precipitation is back for Friday night through the weekend. Friday night through Saturday we see rain mostly over the southern part of the state, from US 50 southward. Farther north we see just clouds, or even clouds and some Saturday sun. But, from Saturday night through Sunday midday, we have a second, much stronger wave of moisture coming. Rain can be from .25”-2” over 90% of the state. Specifically, draw a line from Angola to Attica. North and west of that line we see lower end rain totals…a quarter inch or less. But, south and east of that line…look out! We see some very heavy rains in central and eastern Indiana. The heaviest rains come around midnight to 3 am Saturday night into Sunday morning.

We turn partly sunny Sunday afternoon, and it will be windy. Then we put together several nice days from Monday through next Wednesday, with near normal temps and low winds. The next batch of precipitation we are watching rolls in overnight nest Wednesday night into Thursday early morning, bringing .25” to .5” of moisture with 70% coverage. There is a chance that some of that rain ends as snow Thursday morning, with a change to windy, much colder air. That may even allow some flurries to linger all day over far northern Indiana next Thursday.

A quick moving system brings snow for next Friday, a coating to 2 inches. Then for the extended period, we have a nice weekend to start off March: mixed clouds and sun, right on into Monday, the 4th. However, we finish the extended period with a massive rain maker Action may start on Tuesday the 5th with 1-3 inches of wet snow, but then snow turns to rain and through Wednesday the 6th we can see cumulative rain totals at half to 1.5” over 100% of the state. It will be an impressive early March storm.