Our weather pattern is getting very active and very interesting starting this weekend. We are putting more snow in the forecast, both with more little waves, and a potentially much stronger system right in the middle of the entire mess. But, before we get there, let’s start with today. Today, high pressure sits over OH and moves off to the east. We still see a good amount of cold air dominating today, but we should see winds go more southwest this afternoon, and that will allow temps to bump up just a bit. We keep that southwest flow right on into tomorrow morning. 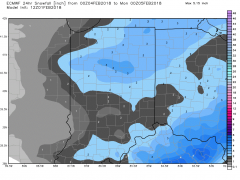 Our next system does arrive late tomorrow afternoon. Clouds will be building from midday on, while the southwest winds take temps back to normal and even slightly above normal levels.  Snow begins tomorrow evening and will continue through Sunday. We are bumping snow totals up for the northern half of the state, with 2-4 inch potential from I-70 northward. South of I-70 we can see a mix of rain and snow, and snow accumulations will be closer to a coating to an inch or two. We do not expect excessively warm air in the south, but temps can move into the 35-36 degree range Sunday afternoon, which make for the more complicated forecast. The map above shows potential snow totals from the weekend system.

Monday we are dry, but Tuesday we have a clipper that brings a quick coating to 2 inches to the northern half of the state again. Action will be limited south of I-70. But, overnight Tuesday night through Wednesday, a strong low lifts up from the southwest, and it can bring significant moisture into the state. Liquid equivalent precipitation totals will be from .25”-1” over the entire state. But, temperatures will play a HUGE role in this storm. Right now we see freezing temps all the way down to I-70 overnight Tuesday night as some significant moisture lifts in. That would point to heavy snows over the northern half of the state from midnight through noon on Wednesday. Those snows would be followed by strong, gusty winds as snow tapers off, leading to blowing and drifting. In southern Indiana, we would be dealing with rain and snow mixing, still potentially giving significant (for southern Indiana) snow accumulations, more so on Wednesday. This system has really blown up on the latest model run, and we do not like to make major changes based on limited model runs. But, going into a weekend, we want to give a heads up on this. IF we play it small, the way we have been up to this point, it still yields several inches of snow. If it blows up, as models are suggesting recently, that just adds to the 7-10 day snow totals we are expected. So, stay tuned. We will put out our official snow totals and forecast for this midweek event bright and early Monday morning.

Behind that system, no matter if it turns out significant or minor, we have another clipper for Thursday afternoon and Friday morning that brings 2-4 inches of snow to 70% of the state. Then arctic air races in to finish next week. A strong system for the 12th-13th rounds out our look at the next 10 days. That system can bring several more inches of snow potential.

Gear up. It all starts this weekend.