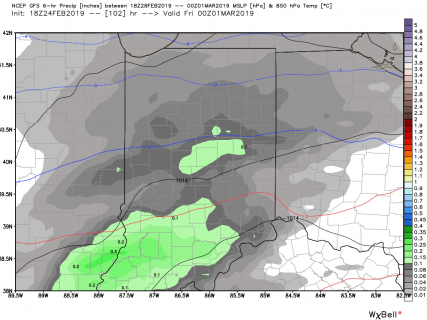 After a somewhat soggy pattern the past few weeks, we settle in with some drier weather through the next couple of weeks. The tradeoff will be cold air, and plenty of it. However, we think that generally, we will see minimal moisture, with only two distinct moisture chances over the next 10 days. Both of those end up with liquid equivalents under a tenth or two. Let’s break it down.

High pressure works into the state today and will keep us sunny and dry through at least tomorrow statewide. Temps will be below normal, but at least we will see winds significantly lower than yesterday. Wednesday we continue to see a majority of the state dry and sunny, but a minor clipper-like system crossing the Great Lakes will drag a few clouds into far northern parts of Indiana, and we won’t rule out a few flurries up that way. Generally, any threat of light snow stays north of US 30, and likely north of US 6.

Later Thursday afternoon and Thursday night we have minor snow chances moving across the southern half of Indiana as a little disturbance lifts in from the southwest. We expect no more than a coating to an inch or two, but we see 80% coverage from I-70 southward. The map shows moisture potential for the 6 hour period ending at midnight Thursday night. This disturbance leads to hit and miss scattered snow showers and flurries over the rest of the state through Friday and Saturday, although coverage either of those days will be 40% or less. We just are not able to wave the “all clear” flag yet at this time.

Sunday, Monday and Tuesday return to dry, cold and at least partly sunny. Temps remain below normal, but clouds will start to build on Tuesday. Overnight next Tuesday night through Wednesday we see our second chance of light snow, with a system crossing the eastern corn belt. We can see a coating to an inch of snow from that event, ending Wednesday afternoon.

In the extended period, we stay on the dry side of things, with a chance of scattered light snow showers on the 8th. Minor accumulations can be seen, but coverage only around 30%. Then we swing back to a very active, very wet period toward the middle third of the month. Temperature’s warm dramatically, and we can see -5”-1.5” of rain for the 10th and 11th, followed by another .25”-1” on the 12th. Both of those waves may morph into 1 good event as we move closer to the period, but the idea is that we get wet and warm quickly after this current cooler push again.