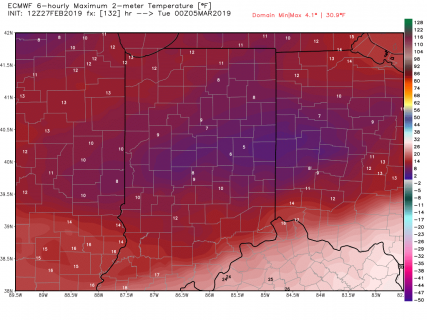 A couple more dry days are on the way for the region, but we don’t completely get rid of clouds. We should see a mix of clouds and sun today and tomorrow, and we stay chilly, but just seasonally so. Clouds will be on the increase Saturday ahead of our next system.

That system continues to take shape and we are making some more changes to the forecast as we finish the weekend. WE see snow arriving in SW Indiana early on Sunday morning and spreading SW to NE. WE will see snow over most of the state, but there are still some significant model discrepancies. Right now, we are suggesting snows from 2-6 inches, and perhaps as much as 8 in southern Indiana. However, this storm will be very track dependent, much like previous systems. There is plenty of moisture with it. Far to the south, near the Ohio river, we may end up seeing mostly rain, or at worst, some freezing rain mixing with snow. That will decrease the overall snow potential there. We expect to make our final snow totals projections tomorrow morning, but right now Sunday looks to be somewhat of a mess. Precipitation coverage will be around 100%.

No change in the outlook for the start of next week…we still look dry and cold. If anything we are actually thinking colder temps for Monday and Tuesday than our previous forecasts. We expect high temps for Monday to be in the single digits and low teens, and highs Tuesday will be in the mid-teens. The map at right shows Monday’s potential daytime maximum temps. Overnight lows Monday night will range from 5 above to 5 below. This will be the coldest air since that late January cold snap. This cold air and north flow will combine to trigger some scattered lake effect snow showers overnight Tuesday night in northern Indiana, but nothing farther south. Wednesday stays dry, but may not be quite as cold.

A quick moving system brings increasing clouds on Thursday, and the chance of scattered snow showers for Thursday late afternoon and evening. Amounts will be limited to a coating to an inch. We move right back to partly sunny skies next Friday.

We are bumping our next system forward quite dramatically next weekend. We can see rain now for Saturday and Sunday, as temps moderate quickly. However, it is unclear just how much of a strong northern push this warming has, so at the moment, we are allowing rain and thunderstorms in southern Indiana, but still keeping an eye out for snow up north. Liquid totals will be from .25”-1” at least.

The rest of the extended 11-16 day period looks less active this morning. We can’t rule out scattered snow showers for Monday the 11th with only minor accumulations. Then for Tuesday the 12th through that Friday, we see cloudy to partly sunny skies with the potential for a few scattered snow showers each day, never any with significant accumulation potential. Temps stay on the colder side of normal.