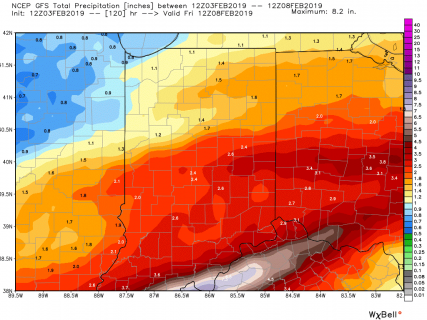 Warm weather continues today, but we shift into a very active pattern for this week. As we look at the forecast on the whole this morning, we have a rather large concern about too much water coming, particularly on still frozen ground in some spots. The thaw this weekend was enough to make the top layer of the ground very greasy, but underneath, we still have a strong frozen layer, and that will make it very interesting to see where the water ends up going.

Today, scattered showers develop across the state, but only end up with about 60% coverage. We would skew this coverage better over the northern half of the state, but really don’t want to completely rule anyone out at this point. There will be some pretty sizable holes in the rain coverage, though. Rain totals will end up from a few hundredths to about .3”. Winds will stay strong out of the SW through the day, allowing another day of warm air streaming over us.

We turn a little colder tomorrow behind today’s front. We should see a mix of clouds and sun through the first part of the day, but then clouds increase later in the afternoon, ahead of our next system. Rain and scattered showers move in tomorrow evening and overnight in west central and NW Indiana, and we can’t rule out some wet snow mixing in during the overnight. This leads to a very wet 2 day period, with rain Wednesday bringing .5”-.1” with 100% coverage, and then Thursday featuring .25”-1.25” rains with 90% coverage. The heaviest rains Thursday will be south of I-70 where we expect widespread totals near that 1” part of the range. This two day period is what is raising our biggest concerns about too much water in the short term. The map shows cumulative rain potential now through Friday morning.

Friday clouds give way to sun, but we turn significantly colder. In fact, we expect temperatures to be below freezing statewide. Partly sunny, but cold conditions hold through Saturday.

Sunday clouds increase. We are still cold, with temps below normal, we expect a little spat of snow to come across the state, bringing a coating to an inch of accumulation with 75% coverage. This wave of snow does not last long at all. We are back to partly sunny skies for next Monday.

Tuesday rain shows up, bringing .25”-.75” rain totals and 90% coverage. However, this system moves through faster, with clearing happening already by sunset or at least near sunset Tuesday night. Another push of cold Canadian air comes in for next Wednesday, the 13th, with below freezing temps again statewide.

In the extended period, we continue with a very active pattern. We can see rain form I-70 southward next Thursday (Valentine’s Day), with just clouds north. Then the same basic set up for next Friday as well, with rain south of US 50, and just cloudy over the rest of the state. Morning scattered showers kick off the weekend next Saturday morning (16th) but then we turn colder. As clouds give way to sun for the balance of next weekend and the start of the week after next, we see much colder air returning, with temps well below normal through president’s day and the following Tuesday.