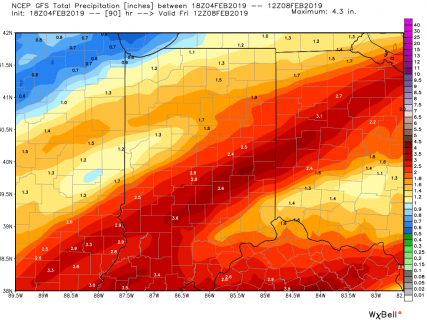 A little colder today behind the front that brought some light rain yesterday. This cold push is just the first in several that we take over the next week to 10 days that push temps down. Generally, we are mostly unchanged in our forecast this morning, but do have a few tweaks from nearly next week on through the extended 11-16 day forecast period.

Today we should see a lot of clouds, but won’t rule out some sunny breaks here and there. A lot of the sun potential really depends on how fast fog burns off this morning and how thick that fog was in some spots. Either way, clouds will be back on the increase this afternoon, and we expect our next round of precipitation to roll in late tonight. Rains should start to push into western Indiana ahead of midnight, spreading east toward sunrise. Rain will then stay over the state, with a couple of waves moving through for all of Wednesday and Thursday. Rain totals for the period will be 1”-2.5” with coverage at nearly 100%. Cumulative rain totals through Friday morning are shown on the map at right. We think the 3”+ totals on this map are overdone, and are keeping our forecast below that. However, the geographic spread of the rain, particularly the heavy rains, is well represented on this map.

Friday, we clear out and turn significantly colder. We should see the entire state below freezing for Friday, and the cold air lingers through Saturday too with partly sunny skies. We don’t warm much Sunday either, and as a little clipper wave comes through, we have to allow for some light snow from late afternoon through the evening. We expect a coating to 1 inch of snow, but are taking coverage back a little bit this morning to around 60% of the state. We stay cold next Monday but should be partly sunny again.

Our first significant change to the forecast comes next Tuesday, the 12th. We still have a nice system moving across the state, but cold air holds over a larger part of the region. That means we are still looking for rain in the south, but only up to about the US 50 area. Over the rest of the state, we see snow with several inches possible. However, this will be a rather wet snow. Right now, the low looks to track from the Vincennes area across to Dayton and Columbus Ohio. But, if the low lifts farther north, that will allow for more rain, particularly in the east. This system is still 7 days away…way too far out to really get to specific on things like snow totals…but the shift to more cold air is the biggest change this morning. We see another push of cold air for midweek next week on Wednesday, with morning flurries and some strong winds. We expect the entire state to be below freezing again, and the winds create low wind chills.

Next Thursday – Valentine’s Day – starts with some sun but will feature mostly increasing clouds. That leads to snow for Thursday night through next Friday, and accumulations are possible. For the rest of the extended period, we have some rain developing for Saturday the 16th, totals from .25”-1” over 80% of the state, which lingers into Sunday. Then Presidents Day (Monday the 18th) we go back to snow with possible accumulations. We finish out the extended period with partly sunny skies, but we are not looking for quite as cold of air as our previous forecast…we should see some slight moderation.

Overall, our pattern remains very active, and we can not stress enough that the rains the rest of this week are going to be excessive, and most of the state will end up with way too much water sitting around.