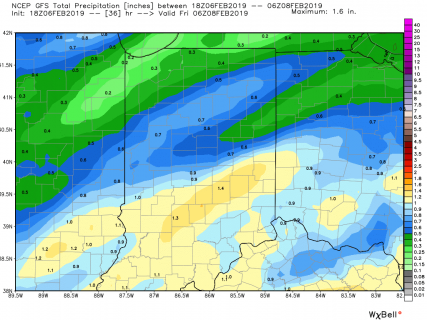 Rain continues over the state today. We look for additional rains to total .5”-1.5” over a majority of the state. We even have a chance of a thunderstorm or two. The thunderstorm potential comes thanks to significantly colder air that will start to come in on the backside of the cold front that is triggering this rain. The big difference will be similar to spring-time fronts. Thunder won’t be a major deal, but we do expect several bands of heavier rain, particularly in central and southern Indiana. We turn much colder this evening and overnight. The map shows additional rain potential today through midday tomorrow.

For Friday, we should turn out partly sunny, breezy and cold. It may take a little bit to get the clouds to break up in parts of the state, but generally, we settle in for a couple of drier days here. We should see the entire state below freezing for tomorrow and the winds will make it feel colder, generally out of the north at 12-25 mph. Cold air lingers through the weekend, with partly sunny skies on Saturday, but increasing clouds Sunday. We still expect scattered light snow showers Sunday afternoon and evening, giving a coating to 1 inch of snow, with coverage at 60% of the state. We stay cold next Monday but should be partly sunny again over most of the state. There will be some scattered rain shower action from US 50 southward on Monday, with rain totals from .1”-.5”.

Tuesday continues to look more and more interesting. We believe this system will end up being a significant event for the state. We still expect a rain and snow event, but the rains are tracking farther north on some of the latest model runs. Right now, we are keeping the system as “all snow” from US 24 northward, but may have to push that closer to US 30 if current trends hold. Rains initially will be from US 50 southward early Tuesday, but the warmer air lifts north in a hurry, so from US 24 south, we can see a rain/snow mix, but have to keep the door open for a bias to more rain. Overall moisture potential is higher too, with this system showing liquid equivalent precipitation totals from .25”-1.25, and an inch and a half would not be out of the question. We will keep watching the event and tweak things further, if needed, tomorrow.

We turn colder again next Wednesday with partly sunny skies, and then Thursday, while the cold temps stay, clouds begin to increase. Temps could stay subfreezing again all day Wednesday.

Valentine’s night gets a little more interesting. A frontal complex works in from Thursday night through Friday morning. Snow looks to fall north and west of a line from Portland to Vincennes. WE an see a coating to 3 inches in those areas with 80% coverage. Then south and east of that line, we have rain, with totals from .1”-.25” and coverage of 70%. It turns very windy overnight next Thursday night, and that may create some visibility problems early on Friday. However, we clear out by next Friday afternoon. Sunshine will dominate through next Saturday.

For the extended period, we have some rain arriving for Sunday the 17th with .25”-.75” potential, then we turn much colder again for the following week. Dry Presidents Day, then increasing clouds for Tuesday the 19th. We have a chance of snow developing from I-70 southward, Tuesday night into Wednesday morning, but nothing farther north. Sun is back for Wednesday afternoon, then Thursday and Friday of next week feature a mix of clouds and sun, with the potential for a few flurries here and there. Temps will be below normal for most of the extended 11-16 day forecast window.