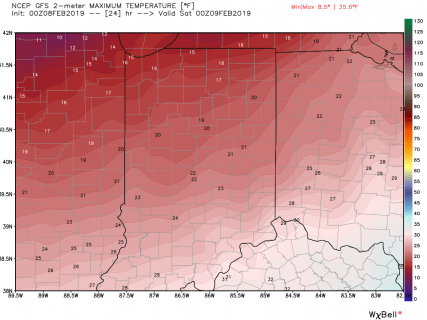 Windy and colder weather blasts into the state today. We likely see winds average 15 to 30 mph through at least part of the day before subsiding later on. Temps will be significantly colder, and will be subfreezing for highs over most of the state. The map shows high temps this afternoon. The cold air holds through the weekend, with partly sunny skies for tomorrow. Clouds increase on Sunday with scattered light snow showers Sunday evening and overnight, giving a coating to 1 inch of snow, with coverage at 60% of the state. We stay cold next Monday but should be partly sunny again over most of the state. There will be some scattered rain shower action on Monday lingering near the river, but nothing farther north.

Tuesday brings rain to a large part to the state from I-70 southward, and the chance of a coating to 2 inches of snow from US 24 northward. That snow can change over to light rain in the afternoon and evening up north. Liquid precipitation totals will be from .2”-1” over most of the state.

We turn colder again next Wednesday with partly sunny skies, and then Thursday, while the cold temps stay, clouds begin to increase. Temps could stay subfreezing again all day Wednesday.

Friday brings another round of rain to the region, with .25”-1” rain totals and 100% coverage. All action is likely done by sunset. The weekend is dry both Saturday and Sunday, although we can’t rule out a few showers overnight next Sunday night into early Monday (the 18th).

For the extended period, two systems are showing signs of life. The first event brings a mix or fain and snow in for next Tuesday night through Wednesday the 20th. This will be mostly south of I-70. Then a stronger system with plenty of cold air arrives for Friday the 22nd through Saturday the 23rd. This produces snow and think there could be potential for significant accumulation. However, it is very early…and any storm that has significant snow potential will be very dependent on track. So, we will continue to watch closely.