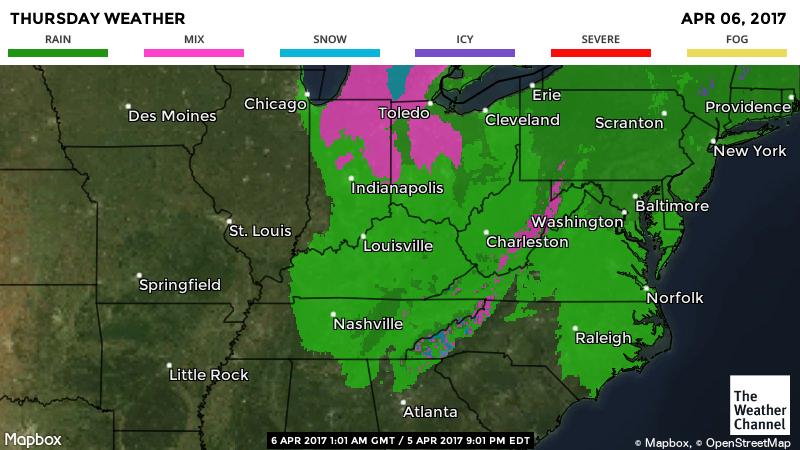 The low-pressure system that brought heavy rain, thunderstorms, and the threat of severe weather to the state Wednesday (including a tornado watch in southeast Indiana) will lift north and east today. The were some reports of hail in parts of Indiana Wednesday, but the warm front didn’t move as far north as first thought, which put a limit on the amount of severe weather. However, we did have strong wind gusts knocked down trees east of Bloomington. As the counterclockwise rotation continues, it will begin to draw colder air into Indiana. The precipitation today begins as rain, but as temps begin to fall in the afternoon, snow will likely begin to mix in with the rainfall. It’s going to be very blustery today. Parts of the state will see winds ranging from 35-50 miles per hour sustained. It probably doesn’t come as a surprise that a wind advisory is in effect for today. As it gets colder overnight Thursday into Friday, I wouldn’t rule out a dusting of snow in parts of the state, but with warmer soil temps it probably won’t last long.

We won’t be done with the winter-like conditions as temperatures will still be below normal on Friday, including freezing temps Friday and Saturday morning. High pressure will then begin moving in and finally start to dry things out. The weekend looks sunny and warm across Indiana.

The extended forecast still shows more rain moving into Indiana sometime on the 11th or 12th, (possibly as early as the 10th) bringing the state another .5” of rain. Another system looks to move into the state on the 15th or 16th and add another .25-.75” of moisture to saturated ground. That means even with the warmer forecast this weekend, there isn’t a lot of dry down opportunity for farmers looking to get some work done in the field. After the cold weather begins to move out of Indiana on Friday afternoon, temps look to be normal to above normal over the next 10 days.