Scattered showers and thunderstorms today trigger a few hundredths to a third of an inch, with coverage at 60%. A few stronger thunderstorms may move through the state today, but that action will be very limited. If you do happen to find yourself with heavier thunderstorms, rains from half to .75” could happen, but again, those areas will be few and far between. We are dry for Saturday. 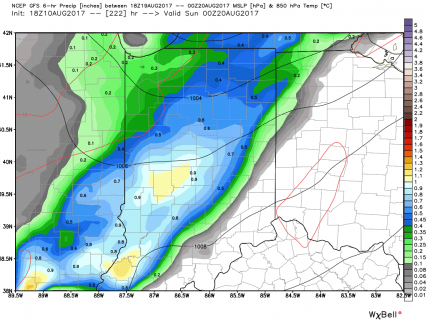 Our Sunday system has degraded to nearly nothing. We won’t completely disallow rain in the forecast over central and southern Indiana, but totals look to be a few hundredths to half an inch or less over the region, with coverage back to 30%. In fact, this system may end up missing the entirety of the state. If it does, the sunshine will dominate in its place.

Dry Monday through Wednesday of next week. However, models are going more active now for that late next week period. We can see scattered showers from late Wednesday into Thursday, then again for the weekend. The map above shows a snap shot of a possible set up next Saturday night. Cumulative rain totals can be from half to 1.5” over 80% of the state. We have a concern that these two systems will merge and lose a lot of potential precipitation by the time we get there, but for now, our precipitation outlook looks better for the end of the 10 day period than it looked a few days ago.

In the extended period, we have a front around the 23rd of August that can bring up to half an inch of rain. But, the rest of the extended window is dry, with upper-level high pressure in play.

So, not many major changes this morning, with the most significant update to our forecast coming with a wetter outlook from next Wednesday through Saturday. Temps will be mostly near normal through this upcoming 2 week period.