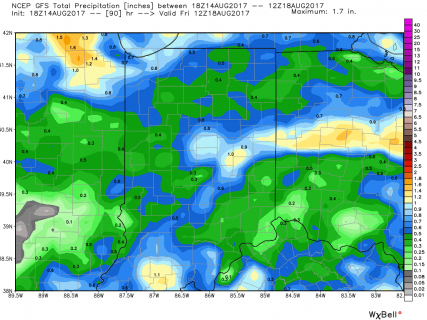 Mostly dry today and tomorrow. A weak trough sags across the northern part of the state today and that may trigger some clouds, but we do not think that precipitation is a big concern, outside of an occasional spit or sprinkle. The available moisture is just not that high to trigger anything of consequence. Our next good front is delayed just a bit this morning, and will not show up until early Thursday morning, meaning we squeak out yet another dry day tomorrow.

The front for Thursday still looks pretty impressive. We see rains breaking out early in the morning and then working across the state through the day. There will be some good thunderstorm potential in the afternoon. Rain totals will be from .25”-1.2” over 80% of the state, basically unchanged from yesterday’s forecast. For areas to see the upper end of the range, though, we remain convinced that it will take some good thunderstorms to push above half an inch of general rain totals. The map above shows rain potential through Friday morning.

Dry weather is back for Friday, and the pattern remains through the first half of next week.

Our next system starts to nose in next Tuesday afternoon very late, and we see good rains through Wednesday and Thursday, the 23rd and 24th. Those rains can bring rain totals of half to 2 inches at least over 90% of the state. This will be a very good rain event.

The extended 11-16 day period will return to sunshine with an upper level high pressure dome still sitting over the southern part of Ontario, although we are keeping a keen eye out for a minor front around the 28th that may trigger a scattered shower or two.

This remains a good set up for rain for soybeans through the end of the month.