Dry weather settles in over the state today behind the frontal boundary that moved out of the state late yesterday. High pressure will be the focal point of this dry pattern, with 2 distinct high pressure circulations moving across the region between now and the end of Sunday. Temps will be slightly cooler today with lower humidity, but as south winds rotate in behind the highs, we will see temps build through the end of the week and weekend. 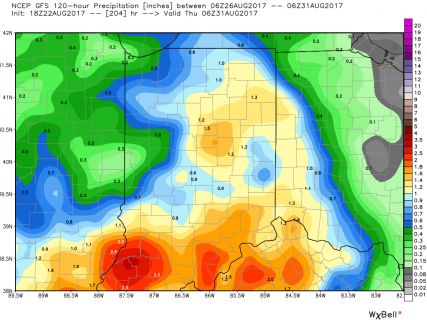 Our next rain threat remains for the first part of next week with rain and even a few thunderstorms dotting the landscape from Monday afternoon through Wednesday. There will be plenty of breaks in the precipitation, and the timing is still uncertain – will there be 1 wave or two, heavy thunderstorms or not? Still, the combined action remains right in our previous range, with .25”-1.25” expected and coverage at about 80% of the state. The map above shows a more aggressive model of moisture for the system early next week through Wednesday night. The two inch plus rain totals are a little over zealous at this point.

By next Thursday, we see a couple of dry days back going through Friday over a large part of the state. However, there will be a strong low, which will be the remains of a tropical storm event moving inland over the TX gulf coast earlier in the week, passing by south of the OH river next Friday. If that low wobbles at all, it may be able to throw some heavier rains in the extreme southernmost counties into early Friday morning. That will be a feature to watch. Right now we say it misses the Hoosier state and is a feature for KY and the TN valley.

In the extended period, we look to open up the holiday weekend a bit more this morning, taking out rain for Saturday the 2nd. Instead, we are seeing more energy flowing into a front for late in the extended window, for the 6th through the 7th, that can bring .2”-.9” to nearly all of the state. Temps still look to be normal to above normal through early September.