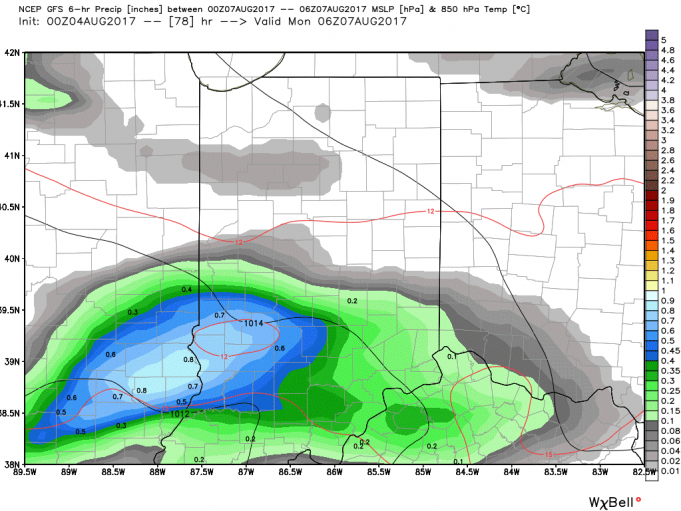 A few scattered showers start off the day today, but we should see action done over northern Indiana by mid morning, and any stragglers in the south and southeastern Indiana should be done by mid afternoon. Sunshine will try and work through the clouds behind the initial showers. Rain totals today will be limited to an additional few hundredth to perhaps a quarter of an inch.

Continued dry tomorrow but clouds will not go far. In fact, clouds will start to build tomorrow night ahead of our next wave.

That next wave is back on Sunday. Rains spread over the state through the day, with rain totals of .25”-1” and coverage at 90%. The upper end of the range is likely only where thunderstorms break out, and that probably will be from west central parts of the state down into southern Indiana. These rains may linger, especially in southern Indiana, into early Monday morning, but in general, we do not see significant rains through Monday. That being said, clouds will be a big player, and we won’t completely clear out right away in the wake of this front. The map above shows a snapshot of the potential set close to midnight Sunday night.

Mostly dry for Tuesday and Wednesday of next week with moderate temps.

A frontal boundary moves into the area later next Thursday. This front brings light moisture to start to the northern half of the state and it spreads to the south. There is a secondary push of heavier moisture and storms that will try and come up the front out of the Missouri. However, models are suggesting that this batch of storms may get pushed south, and stay south of the Ohio River. Right now, we think it is too far out, with only one model run showing this to really make big changes to the forecast. However, stay tuned, as we may change the track of the heaviest rains next Monday in our forecast update. For now, we will keep Thursday-Friday rains at .25”-1.5” with coverage at 80%.