The overall outlook is actually a little bit drier this morning. But, in general, the pattern is devoid of major changes. We have two little waves crossing the state between now and the end of the weekend, and then we are dry all next week.

A weak wave moves over the state Friday and will bring some scattered light precipitation. We are looking for a few hundredths to about .3” over 60% of the state. 24 hours ago we wanted to skew this more to the northern half of the state, but this morning we need to allow moisture farther south. We still don’t think the coverage is all that great, but we can see a few showers down into central and southern Indiana. 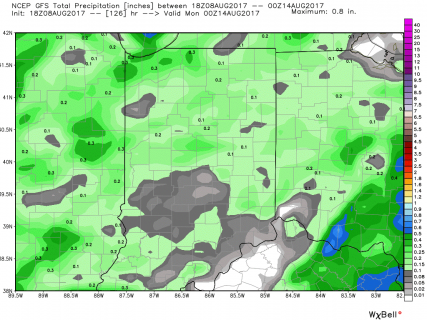 Saturday should be mostly dry with sunshine in control, then our next system moves in for Sunday. This system looks great off to the west, but falls apart as it moves into the state. We are going to drop rain potential down to a few hundredths to half an inch with coverage at 70% over central and southern Indiana. Northern Indiana gets nothing. In addition, we will not rule out this system collapsing and curving even farther south, trying to stay south of the OH River. Some models are showing that, but we are not going to take that full step in our forecast. Still, this system is a minor shell of what it was several days ago. We think it basically tries to rain itself out over MO before it gets here. The map above is rain totals through Sunday evening. Remember…this is a cumulative map…of the system from Friday and the Sunday wave. That’s not very much rain from 2 systems.

Dry for Monday on through at least Friday of next week. The extended 11-16 day period suggests an upper-level high remains entrenched over southern Ontario, and that would keep dry weather in for the entire extended period as well. Some models are suggesting some moisture flaring up around the outer edge of that high, but we think that the air mass needs to be much, much warmer to trigger that kind of pattern. That is the “ring of fire” pattern that you can see when an extremely hot ridge is building over parts of the country. It is not something you see around a cooler, Canadian high in august.

Temps will remain normal to below normal through the remainder of the next two weeks at least. The current pattern says we are cool but dry from next Monday, potentially through the 24th.