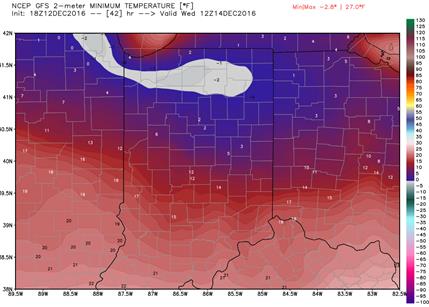 Cold air steps up its presence today with strong northwest flow. That flow will bring in a quick moving little trough that acts similarly to an Alberta clipper type wave, which should produce a small, quick burst of snow over the state, particularly over central Indiana. The best time frame for this will be mid to late morning through mid afternoon. Snows form a coating to 2 inches will fall predominantly between US24 and I-70, with coverage around 70%. North of there we can see flurries, and south we can see scattered rain showers mixing with sloppy wet snow flakes to the tune of a few hundredths to a tenth or two of liquid equivalent. Everything should be off to the east by sunset.

Even colder air blasts in for Wednesday and Thursday. Temps sink down to the single digits to near zero (even below in few spots) tomorrow morning over the northern third of the state, and over the northern half of the state Thursday morning. From there, though we start to see south winds develop ahead of our next weekend system, and that should allow temps to moderate a bit for later Thursday and Friday. The map shows low temperatures tomorrow morning.

That next system starts to arrive late Friday afternoon and Friday evening. Models clearly do not have a good handle on this system yet, as they have flip-flopped away from the heavy, heavy moisture potential shown 24 hours ago, and are going more subdued. We are not making a call on this yet, as we expect a flip (or two) back to heavier action before the time comes. The only thing we can say for certain is we will see an interesting event unfold over the state this weekend. WE look for with snow overspreading most of the state with some accumulations overnight Friday night all the way down to US 50. Then the uncertainty settles back in. Temps are likely to moderate going into Saturday over the southern part of the state, which can lead to some rain or a rain snow mix. Most of where the rains and snows set up will be determined by the track of the low. At this point, that track comes right across the state, but could fluctuate in a 100-mile band as it moves southwest to northeast across the state. The latest model runs keep it in the southern part of the state, which would allow for some good snows. But, latest models also put combined moisture in at half an inch or so, down from the 1.5” that models had been saying. So…long story short – nothing is changing in our forecast for now. We are keeping eyes out for the potential of significant snow and even significant rains. Either way, the weekend could be nasty.

Behind the system – no matter if it is rain, snow or a combination of the two – another arctic blast is on the way for early next week. Temps will max out in the single digits for Monday, recovering into the teens and 20s for Tuesday. A system sweeps through from SW to NE across the state next Wednesday with liquid equivalent precipitation at .25” or less, coverage at 60%. WE think this may end up being mostly light rain, but time will tell, as that will be dependent on the strength of south flow as the moisture moves through. Then after a drier day or two, we expect another system in for Christmas Eve and Christmas day. That one could lead with heavy rains followed by some decent snow accumulations. Liquid potential is anywhere from half to 1 inch.

The colder than normal pattern will remain active on precipitation through the last part of the month.