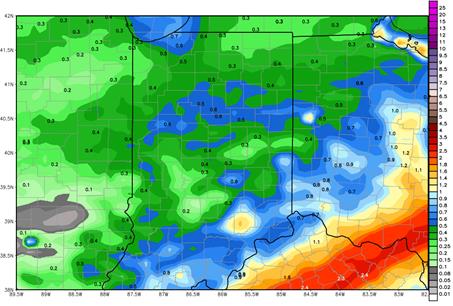 After a cold start today, south winds will help temps moderate just a bit. We still likely will not go over “normal highs, but we will be able to do a little better than the past few days where we have been so cold. However, clouds will be on the increase, as we gear up for our next system this weekend.

That system continues to look similar to how we laid things out 24 hours ago. That means a large part of the state will see predominately rain. The biggest area where this system could still surprise will come on the backside. Will the cold air race in a little sooner, while moisture is still trying to clear the area to the east? Will better wrap around develop through the day Sunday? But, initially, this looks to start as a little snow up north, have rain on Saturday, and then the rain switches back over to snow in northern areas Saturday afternoon/eve before ending. We are tweaking/finessing our precipitation totals and types a bit here this morning, but nothing serious. From US 6 northward, we can see action starting tonight and going through tomorrow early morning as snow, accumulating a coating to 2 inches. Then rains for tomorrow morning into early afternoon with about .2” of liquid falling, and then a switch back to snow that can bring another coating to 2 inches. From SR14 up to US 6, a similar pattern, with a coating to 1 tonight, .2”-.4” rain tomorrow, ending as another coating to an inch as things end later tomorrow. A little monkey wrench in this area is a threat of a brief spat of freezing rain overnight tonight as temps in the lower atmosphere warm just a little faster than we do at the surface, given we will still be lacking solar radiation. Then south of SR14, we may see a few flurries, but have a slightly higher concern about freezing rain or drizzle overnight in areas along the US24 corridor. Ice accumulations will be minor, if they happen, at under a tenth of an inch, but we need to watch it. Farther south, the concern is just not there. Then rains come in all day tomorrow, and we can see things end tomorrow late afternoon with a chance of a coating to an inch of snow, mostly over eastern parts of the state. The detail here may end up getting skewed by 20-50 miles one way or the other, but hopefully, this gives you the idea of how this system is likely to emerge. It is not nearly as bad as we feared early this week…and that is a good thing. The map above shows total liquid equivalent precipitation all periods combined through Sunday morning. However, we have not really talked up winds too much, and in reality, that could be a very big piece here….winds averaging 15-30 mph through the event…leading to blustery conditions, blowing snow and low visibility during times it actually does snow, and nasty wind chills, especially tomorrow night. Do not underestimate the effects of this event.

Bitter cold air blasts in to finish the weekend and start next week. Strong north winds fuel this change, and that will actually lead to wrap around snow and lake effect snows for Sunday, mostly over the northern part of the state. We can add another coating to an inch or two in non-lake effect areas, and 2-4 inches in LaPorte, St Joe, Elkhart counties, and even some lake enhancement down into Marshall and Kosciusko counties. Central and southern Indiana just are cold and blustery. Strong arctic high pressure centers over the state for Monday and holds cold in through Tuesday.

Moderating temps begin to appear Wednesday, as south flow starts to return. WE like temps moving back closer to normal. A weak wave moves across the state Wednesday night through Thursday that can bring minor snow to the northern part of the state, and perhaps a few hundredths to a tenth of an inch of liquid from I-70 southward. Then we move back to dry weather for next Friday and Christmas Eve Saturday, with near normal temps and south winds. In fact, there is a chance we see temps tick a couple degrees above normal for Christmas Eve.

Models suggest there is another system moving out of the central plains into our area on Christmas day. However, timing may push it back later in the day on Christmas Sunday. This event would have liquid to start over most of the state, with a chance to snow as the front passes, and the moisture potential looks large at this point. But, there are a lot of moving pieces that could change between now and then.

The extended period would start with another well below normal push of cold air behind that Christmas day/boxing day system. That would settle in for about 2-3 days, as seems to be the pattern here to this point, then we dry out and moderate temps a bit, and prepare for another frontal complex looking to move in with cold air for the 30th into the turn of the calendar year.