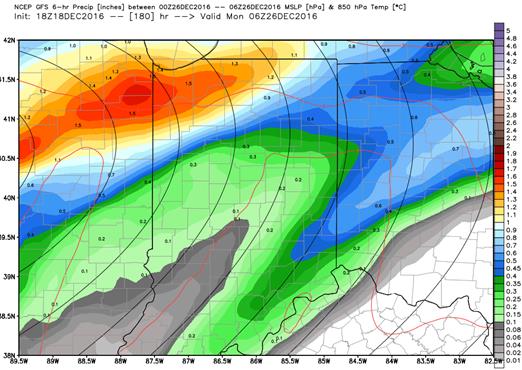 Brutal cold today, but the good news is that the worst should be over after today. Temps this morning are starting well below zero over the northern half of the state and well below normal in the southern half. Strong high pressure will set up to our east this evening over central OH, and that should start to bring southerly winds back in tonight, which will start to moderate temps a bit. Still, it will likely take through tomorrow into early Wednesday before temps get back to near normal levels.

WE stay near normal through the balance of the week, through Friday. WE are also looking at a mostly dry week today through Friday, with no significant weather events moving in. A weak upper level system passes by to the north over MI and the great lakes for Thursday, but we do not see anything more than clouds down into the state here for that day.

Our next system starts to move in for Friday night, and in fact we expect this holiday weekend to be a somewhat active one. Rains move in Friday night and early Saturday with potential for .25”-.33” of mostly liquid, although we can’t rule out some sloppy west snowflakes up north. Then, later Christmas Eve night through Christmas day, we see moisture surging up from the south bringing another batch of mostly rain, and rain totals up to half an inch. Then, overnight Christmas night into the 26th, we have another wave of moisture coming through with the cold front. Cold air will race in fast…and the big question will be how much moisture is still here as the cold air comes in. WE see rains changing to snow, and we do see accumulation potential over a large part of the state. Whether we see all rain, or rain and snow, the fact remains that this will be a very moisture laden system for the holiday weekend. For the 3 day period from Friday night through Monday morning, we can see liquid equivalent precipitation potential up to 1 inch or more. While there is some potential for a “white” Christmas, there is an almost definite surety of a “wet” Christmas. The map above is a snapshot of action Christmas night – around midnight.

Next week we see much colder air blasting in after that Christmas weekend system. Temps Monday afternoon through midweek will be below normal. Then, we moderate to near normal again just in time for another system to move in toward the turn of the month and year. WE expect a front for late the 30th through the 1st with the potential again for rain and snow, with some accumulations and a major cold push then to start 2017.

So, overall the pattern remains the same: active and mostly cold. Even this week with temps pushing back closer to normal, we do not see many days in the northern part of the state where we push too far above freezing, and down south, there is not any major warming either. The wildcard in the outlook this morning revolves around precipitation type for this upcoming holiday weekend.